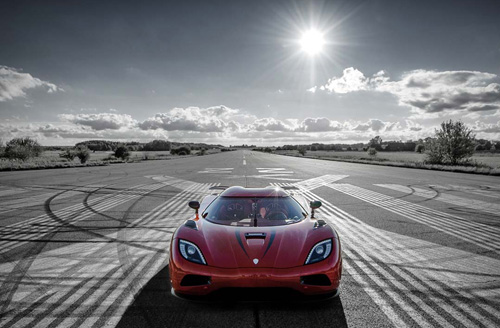 The Porsche 918 Spyder is an incredible supercar that’s powered by a 887 HP, 4.6 liter V8 engine. For most places in the world, taking a Spyder car out to test its top speed is only a dream. Too much traffic, speed limits and so on make driving a supercar like this fast very frustrating.

But in Germany, it’s different. The German Autobahn road system is very well maintained and better yet – no speed limits!

Christian von Koenigsegg is a Swedish entrepreneur who developed the Koenigsegg Agera R supercar (photo above). This extremely fast car was built for speed. The stylish Agera R was made between 2011 and 2014. Only 18 production cars were ever built.

On a stretch of the Audobahn in Germany, a Koenigsegg Agera R is racing along. A Porsche 918 Spyder is in hot pursuit. This video was filmed showing the Porsche 918 Spyder reach about 350 km/h, which translates to an incredible 217.48 mph.

Below are facts about both supercars:

Have you ever dreamed of driving or even owning a Koenigsegg Agera R or Porsche 918 Spyder supercar? Contact us for a VIP experience and actually driving one of these amazing cars. We also work with authorized dealers around the world for the best new or used car rates, covering all major luxury car brands. If you like reading luxury cars, return to follow our luxury blog.