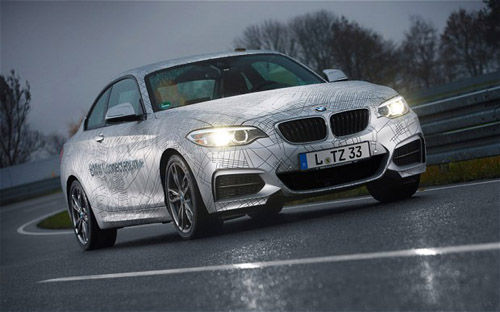 The new 2014 BMW M235i coupe is an incredible self-driving car that was put through a live demonstration during the show at the Las Vegas Motor Speedway.

The BMW ConnectedDrive prototypes were well equipped with a variety of features including electronic braking, radar, steering control and throttle, cameras, GPS and ultrasonic sensors.

A BMW spokesperson was quoted, “The prototype illustrates the BMW Group’s aspiration to offer its customers a highly automated driving experience exuding emotional appeal – even at the car’s dynamic limit.”

Video of the BMW M235i prototype, which is the world’s first self-drifting car.

The BMW M235i prototype cars are smart enough to take over the vehicle’s control even at high speeds. This technology allows the car to be controlled through lane changes plus re-entering the correct lane. It can even corner at a high rate of speed, in addition to drifting.

As part of the 2014 BMW M235i Coupe road test process, it was were driven on Germany’s famous Nurburgring race track and also a 40 mile stretch of road between Munich and Nuremberg, amongst other car traffic.

It’s clear that the 2014 BMW M235i Coupe prototype demonstrates what BMW has previously stated. An essential component of autonomous driving is the ability to safely master extreme driving situations.

If you are looking to purchase a luxury car, please contact The Life of Luxury and we can assist you in the often stressful, car buying experience.

Above photo courtesy of BMW