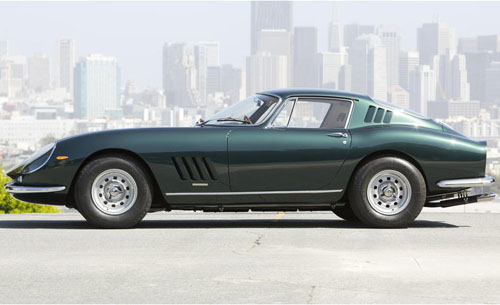 Founded in 1793, Bonhams is one of the largest auction houses of fine art and antiques anywhere in the world. Bonhams holds numerous luxury car auctions including the popular Bonhams Quail Lodge Auction.

This premier auction is known for offering incredible racing and sporting cars and this year will no different. Bonhams just announced it has consigned several Ferrari cars from the company’s Maranello factory.

Here is a summary of some of the announced classic Ferrari cars that will be on display at the Bonhams Quail Lodge Auction later this summer.

– Of the only 17 built, the 12th 1952 Ferrari 212 Europa Coupe by Pinin Farina will be at the show. This Ferrari is both a matching-numbers car that has been certified by Ferrari Classiche, plus a Mille Miglia Storica veteran and a Tour Auto participant.

– An awesome 1966 Ferrari 275 GTB the represents the fifth from last car built is recognized as the most developed version of this popular Ferrari car model. This gorgeous sports car is just one of four cars to leave the Ferrari factory in color Verde Scuro.

– A 1973 365 GTS/4 Daytona Spider that could be possibly be one the most original and finest preserved examples of the Ferrari car model found anywhere.

– A 1959 Ferrari 250 GT Series I Coupe that was previously owned by Prince Bertil of Sweden. This classic Ferrari comes with its original red interior. The car’s exterior is two-tone white and silver.

– A 1973 365 GTS/4 Daytona Spider that could possibly be the most original Ferrari around.

So for true car enthusiasts, be sure to attend the Bonhams Quail Lodge Auction. Enjoy checking out all the amazing Ferrari’s. You may actually end up bidding and owning one.

To learn more about the Bonhams Quail Lodge Auction to be held in Carmel, California – please contact The Life of Luxury. Do you like reading about classic sports cars like the Ferrari? Follow this luxury blog to stay on top of all the best luxury car news.