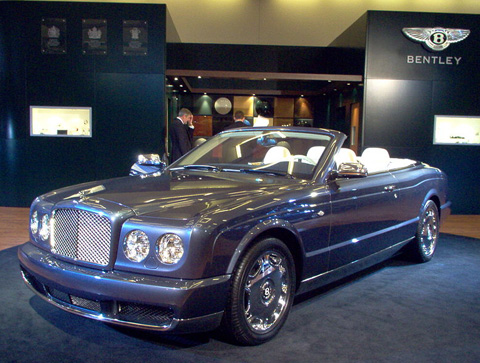 The Azure T is the latest member to join the Bentley family. This 2009 model is a more powerful and exclusive version of the drop-top Azure.

Bentley’s flagship convertible, the Azure T, offers speed, style, superior craftsmanship and high-end acoustics. Too many awesome featires, so where do we begin?

First, let’s talk about Speed: Boy does this luxury Bentley Azure T have speed. This four-seat convertible has a twin-turbocharged V8 engine that produces 500 hp with a top speed of 179 mph and a 0-60 mph of 5.2 seconds.

Even the roof is fast: Touch-button and hydraulic-powered, the three-layer canvas roof stows beneath the rear parcel shelf in 25 seconds. The roof stows in a separate well area; boot space is designed to hold two sets of golf clubs and hand luggage.

Bentley’s Azure T includes standard features that were previously unavailable or only available as extras.

Inside, the Azure T embodies a range of standard features that were previously unavailable or available as cost options on the standard model such as the diamond-quilted seats and door panels, the aluminum finish on the dashboard that is supposed to remind the 1920s racing Bentleys and the instrument faces which are finished in Black rather than Parchment.

The seats and door panels have Diamond Quilting, the fascia features an “engine-turned” aluminum finish and the instrument faces are finished in black.

All Azure T models come with an iPod interface linked to the Infotainment system. Optional Naim for Bentley premium audio system features 10 speakers, a dual-channel sub-woofer and an 1100 watt amplifier.