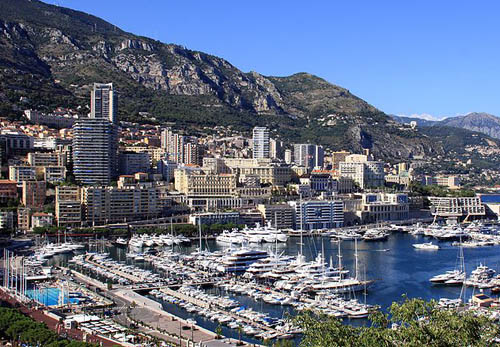 The moment you arrive in Monaco, a small principality located on the French Riviera, you’ll admire its majesty. Where Grace Kelly became Princess Consort, where famous stars of the silver screen, famous athletes, and the world’s Royalty congregate.

Monaco will have you feeling most glamorous. Whether you choose to destress by enjoying a cold French beer while dinning at one of the 5-star cuisines, staying at a 5-star Hotel & Spa, to venturing through the many Cinderella-esk neighborhoods, Monaco has glitz, sublime natural beauty, and enchantment that would fulfill and captivate any excursionist.

A few facts about Monaco would have any globetrotter wanting to visit, and homeowner interested in the sought after luxury real estate, choose Monaco above any other destination.

1. Monaco currently has about 36,000 residents and is primarily occupied by French and Italian citizens, among 125 other nationalities. It is also one of the safest countries to travel to or reside in, with more law enforcement per person than any other country in the world.
2. Monaco is one of the top richest Nations in the world, which boosts the Real Estate market and making it the third most expensive in the world.
3. Monaco has many options for leisure from its chic shops, to 5-star Hotels & Spa, to many French and Italian restaurants, its panoramic picturesque seascape, or its many architecture antiquities.
4. The famous Monaco Grand Prix is held annually on the streets which gives travelers, residents, and automobile enthusiast a front row seat to one of the world’s most prestigious automobile races since 1929.
5. There are numerous casinos in Monaco. The rather famous Monte Carlo Casino (officially the Casino de Monte-Carlo) which was designed by the same architect whom produced the Paris Opera, and has been the famous backdrop in the James Bond franchise makes it a sought out haven.
6. There are not many beaches, but the few Monaco possess have majestic crystal clear waters and golden sand. You will also get to enjoy the many luxury yacht-lined harbors.
7. There is no tax in Monaco. Shopping anyone? At the famous 5 Pavilions, you’ll find many prestigious fashion brands including – Louis Vuitton, Cartier, Dior, Céline, Bulgari, Akris, Lanvin and Yves Saint Laurent.
8. The summers are long in Monaco, and the winters are mild making it an ideal place throughout the year. It’s another way to avoid the heavy jacket wear in Northern Europe during the winter season.
9. The classic beauty of cinema herself Grace Kelly became princess of Monaco when she married Prince Reiner III, that was televised and considered “the first modern event to generate media overkill.” Amongst the royalty whom reside in Monaco till this day, many other accomplished musicians, athletes, Formula One Drivers, and Ambassadors have all occupied the luxurious Monaco.
10. Monaco is the second smallest country in the world, and just about the size of New York’s Central Park. Monaco can be explored in one day and you still would be able to include a nice lunch, and shopping.

If you do travel to Monaco, you’ll discover the country has more than enough to offer while also making you feel like you are luxurious. Contact The Life of Luxury for help planning and booking your next vacation in VIP style. Come back soon and follow this luxury blog and read about other wonderful travel destinations.