Luxury Sports Suites – Where The Money Is 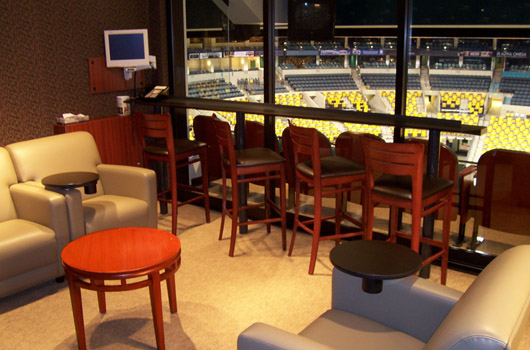 In just the past two decades, luxury suites and other premium seating for football, basketball, baseball, hockey, etc… have transformed the way sports franchises make money and build venues.

Luxury suites, often incorrectly referred to as “sky boxes,” are exclusive, enclosed areas within a sports venue that offer the latest amenities and top of the line service for a hefty price. In major markets such as New York and Los Angeles, suites in prime locations (think 50-yard line in the NFL) go for about $400,000 a season — a price that is likely to keep going higher.

Premium seating, which also includes club seating, courtside seating and party suites, first became prevalent around 1990 at the Palace of Auburn Hills, home of the Detroit Pistons. At that time, premium seating accounted for just 3% of the seats in a given building.

Today, premium seating accounts for almost 25% of seats in new buildings and often goes for double or triple the cost of their less luxurious counterparts. In fact, now franchises can project nearly half of all ticket revenue from premium seating

This source of revenue is so vital that many buildings have been torn down or renovated on the sole reason that they didn’t have enough premium seating.

“The entire market was built out on the fact that you need the revenue from premium seating,” said Bill Dorsey, executive director of luxury suite directors, a trade group that represents 1,000 minor and pro league members.

“It wouldn’t be economically viable to build a venue without a mix of premium seats — even minor league or secondary market venues,” said Marshall Glickman, former president of the NBA’s Portland Trailblazers and now CEO of consulting firm G2 Strategic.

Originally, luxury suites were primarily looked at as a way to secure the financing necessary to build new venues, which today can cost in upward of $1 billion. Luxury suite money is considered contractually obligated income because individuals and corporations sign leases for an 8-to-10-year period. Since a team can’t guarantee a bank it will sell out every single game, this is a way to show its minimum ticketing revenue.

While it still serves a financing role, premium seating has become a major source of revenue for franchises and a form of business entertainment for corporations. Businesses use suites to entertain potential clients, retain current ones and recruit future employees.

“Premium spaces are things that companies tend to covet. The suite option has always provided a unique venue for corporations to have access to entertaining clients,” said Paul Swangard, managing director of the Charles Lundquist College of Business at the University of Oregon.

While luxury suites have been around for about two decades, the business model behind them is still evolving.

The prices have gone up while the number of suites has been flat or declined in some markets. For example, The Dallas Cowboys’ new stadium is expected to have 300 suites at $300,000 each, giving the city a $90 million marketplace. That’s nearly 10 times the market Dallas had just ten years ago, Dorsey said.

Experts said they are seeing a shift away from traditional luxury suites and a move toward more club seating and other premium seats because people like to be in a more social atmosphere.

Also, teams have been experimenting with the location of luxury suites, which are no longer just found above the first level of seating. Today, the suites are being placed closer to the playing field and even in some cases below it. Several NBA venues have built suites beneath the court with the option for several occupants to sit courtside.

Given the hefty price tags that accompany premium seats, franchises are expected to give customers the best accommodations, including the latest high-definition televisions, top-notch service and plush seating areas.

“The challenge is to make the suite experience more than just a place to watch the game,” said Jim Grinstead, publisher of Revenues from Sports Venues.

Experts said franchises must be ready to adapt to the ever-changing desires of premium seat holders.

“We in our industry need to do a better job of designing the venues to have a lot more flexibility,” said Glickman.

This means creating suites that can easily be converted to other types of premium seating. Glickman knows fist-hand, as he said his team didn’t have enough foresight when it built the Rose Garden, the current home of the Blazers.

Customization is another key in the current premium seating market, with leaseholders now having the ability to put their mark on their suites. Some businesses choose to put their logo on the walls or in various other areas of a suite – something that adds value to the investment.

“One size does not fit all. Everything is now customized, and it should be,” said Glickman.