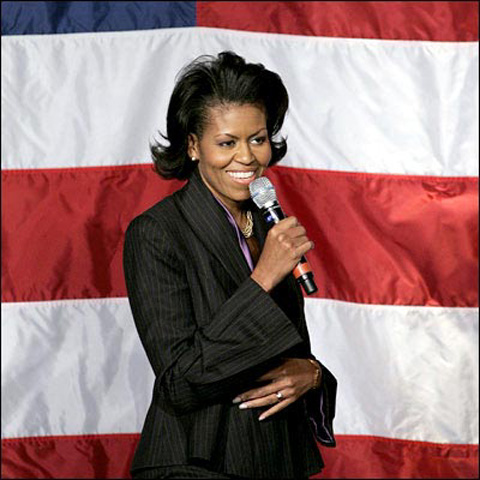 Michelle Obama has been called “my rock” by her proud husband, President Barack Obama. Amongst the wild presidential ride she’s endured, she’s said this many times: nowhere but in America would her story be possible.

Born Michelle LaVaughn Robinson on January 17, 1964, Michelle grew up in a working class Chicago neighborhood during a time the United States embarked on some of the most tumultuous years of the civil rights movement.

She was the daughter of a local water treatment plant worker who suffered from multiple sclerosis. Michelle Obama rose to attend two of the most prestigious universities in the United States – Princeton as an undergraduate and then followed by Harvard Law School.

Unlike her husband Barack Obama, who was the son of a Kenyan student and white Kansas mother, Michelle Obama can trace her family tree back to the beginnings of slavery in the U. S. and embodies the heritage of the nation’s African Americans.

Given all the media attention, Michelle Obama is now being touted as the first fashion icon to inhabit the White House since Jacqueline Kennedy nearly a half-century ago.

From the shape of her eyebrows to her Jackie O-esque hair, Michelle Obama’s look has become a nationwide obsession.

But it seems that Obama’s approach to fashion is different than that of Jacqueline Kennedy.

Kennedy was all about designers and pale colors. Obama shops off the rack at stores ranging from J.Crew to White House / Black Market. And when Michelle does wear a designer label it tends to be Maria Pinto, a Chicago-based designer relatively unknown until recently.

Obama goes for color. Black and red prints, and dresses in red, coral, violet and purple all spiced the campaign trail. Stripes don’t scare her, even when they’re horizontal. With her lean body and impeccable posture, anything she wears seems to work.

President Barack Obama is immensely proud of his wife, and her accomplishments. For much of their married life for instance, she earned more than him especially in at the University of Chicago medical center.

“Most people who meet my wife quickly conclude that she is remarkable. They are right about this — she is smart, funny, and thoroughly charming. She is also very beautiful,” he said recently.

Regardless of how the future unfolds, Michelle Obama will become the ultimate symbol of the American dream, as the first African American first lady, as Barack Obama takes the presidential oath of office.