Owner George Maloof, with a recent assist from Playboy founder Hugh Hefner, offers accommodations unlike any in Vegas.

Among its 347 rooms and suites, the 40-story hotel tower features more than 40 Fantasy Suites and Sky Villas featuring one-of-a-kind amenities never before seen in Las Vegas. “Our client is anyone from a corporation to a couple who is looking for an ultimate fantasy,” Maloof said.

From basketball half-courts and a personal bowling alley to vibrating beds and private “show showers,” the Fantasy Tower is designed for those who think big.

Fantasy Suites in the Fantasy Tower start at $4,000 per night and can go as high as $40,000 per night for the Hugh Hefner Sky Villa, which sits at the top.

The list of amenities in the luxury suites is as long as the Strip itself. For example, the 10,000-square-foot Hardwood Suite boasts a two-level party room, a half basketball court, three NBA-sized Murphy beds, a living-media room, a 10-person Jacuzzi and customized services such as personalized basketball jerseys and cheerleaders. 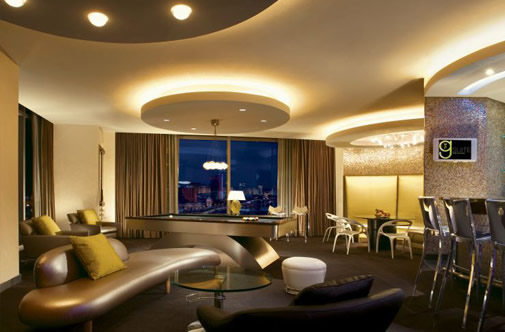 But perhaps the pièce de résistance is the Hugh Hefner Sky Villa, which was designed with the help of Hefner himself. Opening in September, the suite will include an outdoor cantilevered Jacuzzi with glass-end walls, a living room, a media room, a full bar, a fully equipped gym with a sauna, a spa-style treatment room, a personal glass elevator, an 8-foot rotating bed, pop-up plasma TVs and a collection of Playboy art personally selected by Hefner.