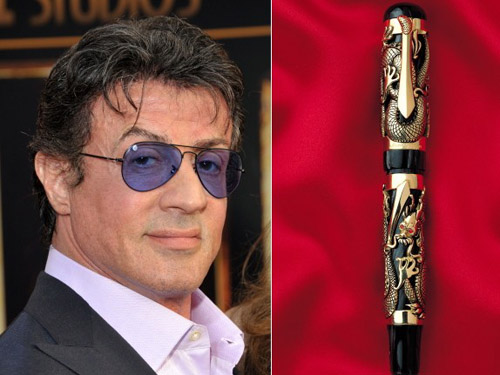 In addition to being a well-known, movie star icon, Sylvester Stallone was just announced he will serve as a brand ambassador to Montegrappa, a luxury pen manufacturer.

In addition to his role as Montegrappa’s brand ambassador, Sylvester Stallone will also be providing creative input to the company’s new 2011 line of luxury pens.

Montegrappa pens have been used by numerous famous people, including Ernest Hemingway and Paulo Coelho, in addition to various  heads of state, royalty and international leaders in politics, sports, business, and entertainment.

Now entering its fifth decade, Sylvester Stallone’s career has been amazing. Mr Stallone has worldwide following of million of devoted fans. He has starred in countless block-buster movies including the Oscar-winning Rocky series, in addition to the Rambo series of films, Cop Land, and recently in the international box office hit The Expendables.

Mr. Giuseppe Aquila, CEO of Montegrappa, was quted on the company’s announcement, “I have had the pleasure of meeting Mr. Stallone on many occasions, including the 2009 Venice Film Festival, where Mr. Stallone was recognized for his filmmaking with the Glory To The Filmmaker Award. Sylvester is much more than a friend; he is an icon and an artist and now, an integral part of Montegrappa’s distinguished history.”