Rome, Italy – The Magic of Trastevere 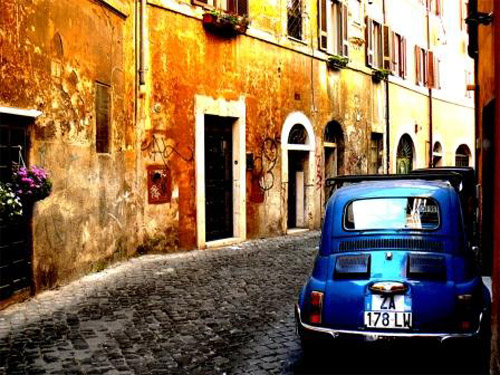 The Trastevere area of Rome Italy, is well known for its restaurants, clubs, theaters, arts and its famous narrow cobbled alleyways.

In the evening, all of the cafes and restaurants tables spill out over to the pavement, especially in the area of Piazza Santa Maria in Trastevere. The morning is better to appreciate the antique charm of Trastevere’s characteristic narrow alleyways.

Trastevere is the district that lays on the right bank of the Tiber. It was called “Trans Tiberem” (across the Tiber) and it was considered a precarious region.

It belonged to the Etruscans until Rome conquered it again and get back in control of both banks of the river. “Pons Sublicius” bridge (from Latin: “bridge built on piles”) was the only one way from Trastevere to the city (Rome). With the Emperor Augustus this area soon began to be considered part of the city.

During the Republic era in 509, the number of sailors and fishermen making a living from the river had increased, and many had taken up residence in Trastevere.

Later, with the wealth of the Imperial Age, luxury villas and gardens were constructed on the hillside of Trastevere. To name a few: Clodia, (Catullus’ “friend”) and Julius Caesar (his garden villa, the Horti Caesaris). The flat land below was occupied by the houses of the poor and small shops. Some of which are still there today!

Trastevere grew in a network of small, curly streets in the Middle Age because of structures on the front of buildings that left no space for carriages to pass.This is why a strong contrast between large houses for rich people and small houses for poor people are still creating such a contrast.

Until the 15th century Trastevere streets had no pavement. Bricks were used first replaced by sampietrini (cobble stones) in a second time.

The church of Santa Maria in Trastevere is one of the oldest churches in Rome, perhaps the first to ever host an open ceremony. This is the queen of all churches in Trastevere. This basilica became the focus of devotion to the Virgin Mary by its people. It is believed that perhaps it was in this church Mother of God was worshiped in Rome. In the piazza, one can admire the Octagonal fountain which has now become a meeting point. Along the years the church has been altered with modifications, but despite of the 18th century additions, Santa Maria has retained its medieval character.

Today this area still has its own style due to the narrow cobbled streets built in the medieval era. At night, both italians and tourists gather together around its many restaurants and pubs. Trastevere is attracting tourists, locals, artists, foreign expats, and many famous people and it is incredibly charming.

In the sixties and seventies, the American musicians/composers Frederic Rzewski and Richard Teitelbaum, of the group Musica Elettronica Viva, lived in Via della Luce. Sergio Leone, the director of Spaghetti Westerns, grew up in Viale Glorioso (there is a marble plaque to his memory on the wall of the apartment building), and went to a Catholic private school in the neighborhood.

As you can see Trastevere is the real heart of Rome!