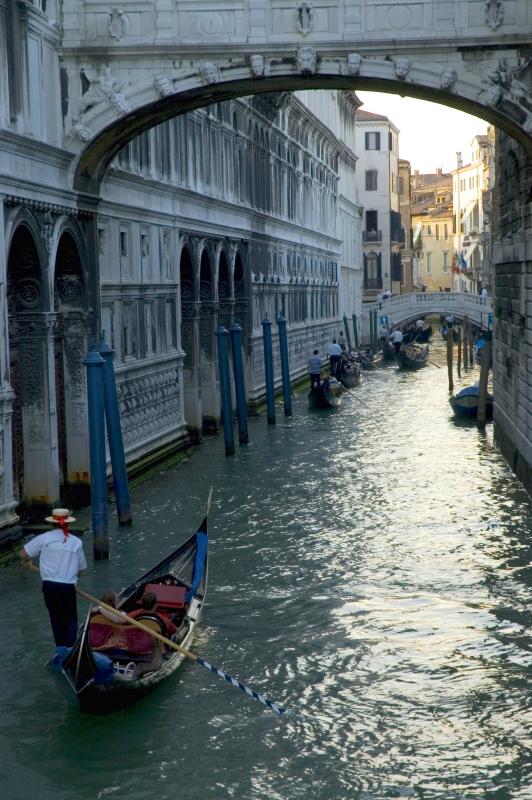 Venice Italy, is an amazing city. When most people think of Venice, they think of gondola rides.

The city of Venice is actually a series of six islands at the edge of the Adriatic Sea. The “streets” of Venice are actually waterways for boat traffic.

Every year, the city’s water levels rise. The muggy summer air cooks the canals and scrapes the paint and enamel from the city’s finest pieces of art. Faithful to its origins, everything in Venice seems to be in peril.

The gondola is the primary mode of transportation throughout the canals, not to mention the enduring symbol of tourism in Venice.

Though speedboats have become increasingly more commonplace nowadays, they have not been able to drown out the traditional songs of the traditional gondoliers, with most of these ballads reciting tales of true love or the magnificent history of Venice Italy itself.

And a storied history it is. Like Genoa, Venice used its expansive waterways to develop into a powerful city, a hub for trade and commercial exploits, until it dominated a large portion of the Mediterranean, the Adriatic and hundreds of vital trade routes.

Venice thrived for centuries, becoming a center of the arts that made all others pale in comparison. Bellini, Titian, Tintoretto and Longhi all called Venice home at some point. Many of their fine works live on in the numerous art galleries and museums dispersed throughout the city’s maze of canals.

Take a gondola ride down the famous Grand Canal and it will lead you to Ca’ Rezzonico and Ca’ d’Oro, the former famous for its ornate ballrooms and aristocratic balconies, the latter for providing shelter for the great works of Titian, Mantegna and Carpaccio.

The exact origination of the gondola is unclear, but some history is available. Back in the year 1094, a boat called a gondola was mentioned in a letter from a Venetian Rupublic official. In the 1490’s, Gondolas appear in Italian paintings by Carpaccio and Bellini. Interestingly, the method of rowing that is depicted, is the same used by gondoliers today.

What most people don’t factor into their dream of a gondola ride in Venice are the crowds of people peering down at you from the city’s many bridges – which tends to ruin the whole intimate and romantic experience. But heck, this is romantic Venice. Go for it!