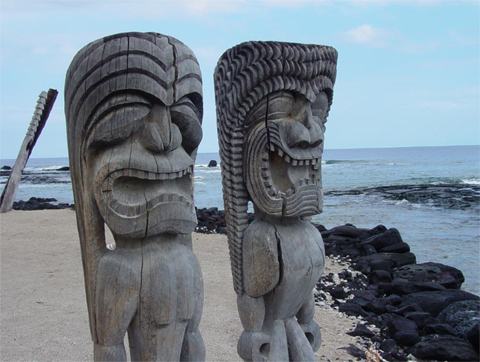 Located on Hawaii’s Big Island, there is a scenic place of refuge called the Pu`uhonua o Honaunau National Historical Park.

Puuhonua o Honaunau is a 182-acre park full of archaeological sites and reconstructions of an ancient Hawaiian “Place of Refuge”. The park offers visitors a self-guided tour of archaeological finds and recreated Polynesian canoes, houses, statuary and much more.

This sacred site was at one time a home to Hawaiian royalty and a place of refuge for those persons who broke a kapu (ancient Hawaiian law) or defeated military.

This Hawaii historical park offers a self-guided tour and learning opportunities. You start your visit at the park office, then can continue your way down to the beach, to the actual Place of Refuge, walled-in sacred ground where those who broke ancient law could go.

History states that if you could make it to the Place of Refuge before you were killed by the king’s soldiers, your death sentence was lifted.

Instead of king’s warriors chasing after you, you can take a leisure walk down to the actual Place of Refuge, but now it’s just a bunch of rocks and other Polynesian artifacts.

While at the Puuhonua o Honaunau National Historical Park, take the time do some green sea-turtle watching, although you are not allowed to bother them. Be advised that is against the law, so running to the Place of Refuge won’t help you there.