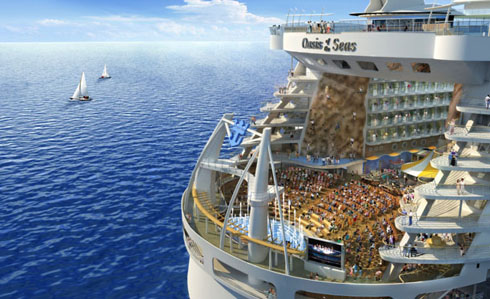 The world awaits the launch Royal Caribbean International’s Oasis of the Seas. When she launches in late 2009, Oasis of the Seas will be the largest and most revolutionary cruise ship in the world.

With apartment balconies overlooking a park, a town square, boutique shops and a choice of restaurants and bars, holidaymakers might think they traveled through time and landed in New York.

The Oasis of the Seas is the world’s largest mega ship and 50 percent bigger than its nearest cruise ship rival – the luxury ocean liner Queen Mary 2 by Cunard.

Oasis of the Seas will be the first ship to tout the cruise line’s new neighborhood concept of seven distinct themed areas, which includes Central Park, Boardwalk, the Royal Promenade, the Pool and Sports Zone and Vitality at Sea Spa and Fitness Center.

The Oasis of the Seas offers six levels of staterooms, a turf-covered chip and putt golf course, the world’s first open-air amphitheatre at the stern, two surfing simulators, a flying fox-style zip-line and a boardwalk surrounded by casual restaurants, it is more like a giant ritzy resort than a cruise ship. 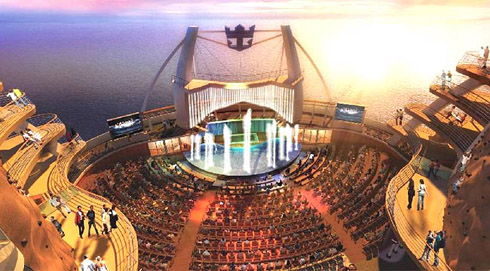 At 220,000 tonnes and with a capacity to carry more than 10,000 passengers and crew, the Oasis of the Seas – the pride of the Royal Caribbean International fleet is set to make waves with its extreme flamboyance.

Initially, it’s restricted to the Caribbean and Mediterranean. The ship will sail from her home port of Port Everglades in Fort Lauderdale, Fla.