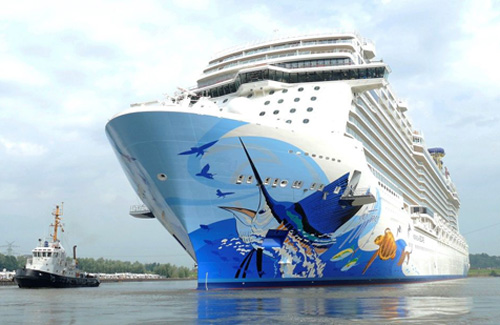 The luxurious Norwegian Escape cruise ship from Norwegian Cruise Line (NCL), had been under construction since September of 2014, in Papenburg, Germany. On August 16, the impressive Norwegian Escape ship floated out of the construction building and is currently getting ready to enter into service in late October of this year.

The luxury cruise ship will become the largest ship in the entire Norwegian Cruise Line fleet. NCL reports Norwegian Escape weighs 164,600 tons and can carry up to 4,200 passengers. You’ll be cruising the open seas in VIP style.

The beautiful, signature hull artwork was designed by Guy Harvey, who is a famous marine wildlife artist and conservationist. The mighty cruise ship measures 1,098 feet in length and is 136 feet wide. It will become the first ship in NCL’s new Breakaway Plus Class line.

The Norwegian Escape still has work to be done such as adding the iconic, Norwegian Cruise Line funnel, plus adding a third story to the ships’ ropes course. When completed the ropes course will become the largest anywhere at sea. This review is a follow up to another story we did in January titled – Norwegian Escape.

There is an amazing series of inaugural events planned in both Europe and Miami. Norwegian Cruise Line plans to have Norwegian Escape ready for its maiden voyage on November 14, 2015. The luxury cruise ship will sail seven-day cruises in the Eastern Caribbean, with departures schedule each Saturday. Each cruise is expected to be a wonderful VIP experience for all passengers.

Andy Stuart is the President and Chief Operating Officer of Norwegian Cruise Line and was quoted, “MEYER WERFT has done an excellent job with the construction of Norwegian Escape. The ship’s float out brings us one step closer to bringing the next evolution of Freestyle Cruising to the world and we couldn’t be more excited.” 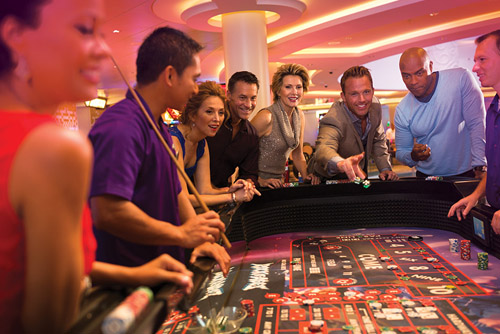 Some exciting features for foodies include the first ship in NCL’s fleet feature enhanced meal menus, in addition to a new per-item pricing policy> This should allow its passengers more freedom and flexibility, plus a wider selection of meal courses for their dining pleasure. Feast away on Norwegian Escapea at the following, signature specialty restaurants – Cagney’s Steakhouse, Le Bistro, La Cucina, plus the new Bayamo restaurant from James Beard Award winning chef Jose Garces. All the mentioned ship restaurants will offer à la carte food options.

Jose Garces is the James Beard Award-Winning Iron Chef and he will feature two fantastic concepts on the ship. The first is a Latin seafood specialty restaurant and will also run Pincho Tapas Bar, a great place to socialize and enjoy great tasting cocktails.

Of course passengers want to be entertained while sailing and won’t be disappointed on Norwegian Escape. Enjoy several well known brands, such as the first-ever floating Jimmy Buffett’s Margaritaville restaurant. 5 O’Clock Somewhere Bar is fun, music venue and outdoor bar located on The Waterfront. The bar will showcase live music performances each night.

Also being introduced on Norwegian Escape, is another new concept. Enjoy a memorable dinner and show and watch “The Record: The Brat Pack™”. This critically acclaimed Hollywood show pays tribute to all the classic soundtracks of motion picture masters in a unique, 360° post-modern cabaret performance. It will be amazing!

For families, there is plenty to onboard Norwegian Escape. The luxury ship will offer an expanded Kids’ Aqua Park, in addition to NCL’s first dedicated nursery just for children ages two years and under.