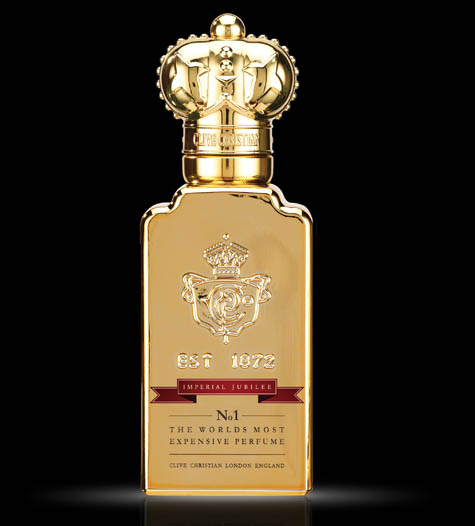 To mark sixty remarkable years of British Sovereign Queen Elizabeth II’s reign and in tribute to her Diamond Jubilee year, Clive Christian is releasing a special edition of his No. 1 Perfume called the “Imperial Jubilee.”

Clive Christian is the creator of “No. 1” – the World’s Most Expensive Perfume and their new “Imperial Jubilee” perfume will be special. The Queen’s Diamond Jubilee will be an incredible celebration across England (her anniversary is June 2) since Queen Elizabeth is the longest serving monarch since Queen Victoria in 1897.

Queen Elizabeth II’s Diamond Jubilee is a very rare and special occasion for the British nation and the Commonwealth, will fall on Saturday, June 2, 2012, and will be marked with special services around the country.

The No.1 Imperial Jubilee holds a higher concentration of Perfume Spray, closer to the Pure Perfume concentration, to ensure a richer and even more enduring experience which is fit for a queen.

According to Victoria Christian, Brand Ambassador for Clive Christian Perfumes, “Only one other British Monarch in history, Queen Victoria, has reigned for 60 years or more. The perfumery that my father, Clive, revived was originally acknowledged by Queen Victoria in 1872 when she granted the image of her crown as a mark of British excellence.”

Following the success of the priceless Clive Christian No.1 Imperial Majesty limited edition, the No.1 Imperial Jubilee Special Edition is placed in a red velvet lined presentation case. The bottle bears the image of the red ribbon which holds the official OBE medal granted by Her Majesty the Queen to Clive Christian in her 2012 New Year’s Honours list for his contribution as a Designer to the Luxury Goods Industry.

Only 500 of these limited edition perfumes will be created – 250 for Men and 250 for Woman. The “Imperial Jubilee” perfume will be released in June 2012.

The Clive Christian No. 1 Imperial Jubilee will retail for $1300 (50ml Concentrated Perfume Spray) and will be available at Bergdorf Goodman and select Saks Fifth Avenue and Neiman Marcus stores nationwide, as well as online at www.neimanmarcus.com.