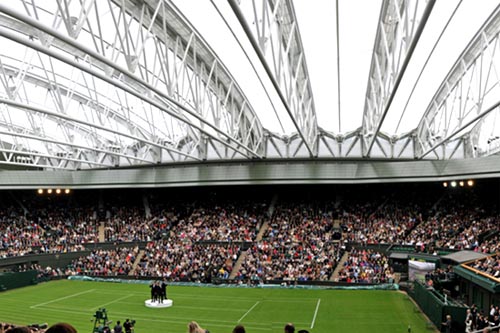 Last month, the All England Club tested its new retractable roof over the Centre Court at Wimbledon. This historical and world famous arena has offered tennis fans some of the most dramatic duels in tennis history.

The addition of this retractable roof has to be one of the biggest changes in Wimbledon’s long history.

The Wimbledon Centre Court retractable roof covers roughly a 246 feet area. It takes only about 10 minutes to close. Construction of the retractable roof took 3 years, and is part of an overall $146 million renovation to the Center Court Stadium.

Wimbledon’s retractable roof is the centerpiece of upgrades to Centre Court that include increasing seating from 13,800 to 15,000, and providing more stairs and lifts.

The new retractable roof will allow all-weather play at the venerable Wimbledon facility, just outside of London, England. Wimbledon is the only Grand Slam tennis event that is still played on grass. Because of the challenging British weather, Wimbledon is consistently plagued by rain delays.

The retractable roof, which is described by the Wimbledon club as a folding fabric concertina type, will provide a non-slippery playing environment in both the open and closed positions.

An important element of the roof design, is to allow natural light to reach the lush green grass. An airflow system will remove condensation from within the stadium to provide a comfortable environment for spectators and players alike, when the retractable roof is closed.