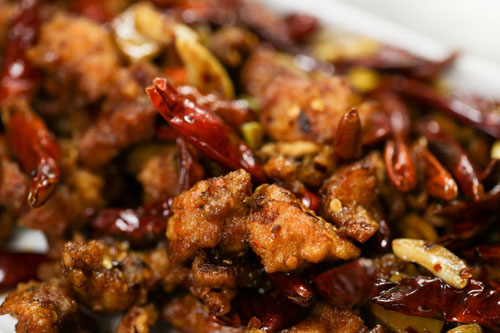 Lao Sze Chuan is one of 16 restaurants owned by Chef Tony Hu and has been honored by receiving the coveted MICHELIN Guide “Bib Gourmand” distinction for the last two years. This location will be the first restaurant in Las Vegas for Tony Lu.

Food lovers will enjoy the fine dining experience at Lao Sze Chuan and select from Sze Chuan cuisine in addition to a variety of popular Mandarin, Hunan, Cantonese plus Shanghai dishes that have been created specifically for the new Palms Casino Resort restaurant.

For example, Tony’s Chicken with Three Chili (photo above) are popular spicy favorites served at the Chicago restaurant and will be available at the The Palms location. One of the new dishes that sounds so delicious is Sze Chaun Peppercorn Fish.

Acclaimed chef Tony Hu is recognized as the “mayor of Chinatown” in Chicago’s culinary world and worked hard to develop Lao Sze Chuan into one of the most beloved Chinese restaurants in the U.S. Hu utilizes high quality ingredients and consistently delivers great tasting, traditional Sze Chuan cuisine.

Vice President of Food and Beverage at Palms Casino Resort, Alexander Schnoeller was quoted, “At Palms we’re continuing to evolve, creating exceptional experiences throughout the property to match our guests’ diverse interests and tastes. We’re honored to welcome Tony Hu and his celebrated cuisine to the property with the opening of Lao Sze Chuan.”

The new Lao Sze Chuan luxury restaurant in Las Vegas will be 150 seats and will feature a vibrant decor. The restaurant will have high ceilings and decorated with ceramic sculptures plus culturally-inspired artwork.

Restaurant guests will also be able to enjoy dining on the outdoor patio space that overlooks the popular Palms Pool.

If you would like to make plans to visit Las Vegas to stay at The Palms Casino Resort and dine at the new Lao Sze Chuan restaurant, please contact us today. We can help plan and book your luxury travel reservation. Come back often to read our luxury blog and follow other luxury travel stories.