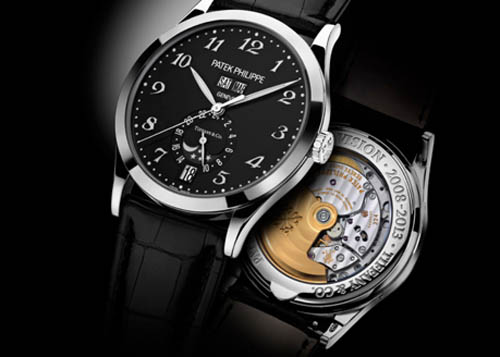 There was a recent announcement by two leaders in the luxury watch industry as Tiffany & Co and Patek Philippe & Co have teamed up.

The two luxury brands announced two new watches — one each for men and women. The announcement coincided with the 5th anniversary of the Patek Philippe boutique at Tiffany’s iconic 5th Avenue store, which was the luxury watchmaker’s first in the U.S.

The men’s version is an Annual Calendar watch that offers a masculine design. The watch features an 18-karat white gold case that encloses a black face, displaying the day, date, month, moon phases plus a 24-hour indication. The watch comes with a black matte black alligator strap.

The women’s version watch is named Gondolo. The watch offers an art deco-inspired look with Roman numerals, in addition to a curved 18-karat white gold and diamond case. The luxury watch is available in in two color options – a matte blue dial with white numerals with a dark blue satin strap, as well as a white mother-of-pearl dial with gold numerals with a cream satin strap.

Both of the new luxury watches are signed each by Patek Philippe and Tiffany & Co.

Patek Philippe’s new partnership with Tiffany & Co. follows a world record for the luxury watchmaking company, which set the record at the Geneva Important Watch Auction in Geneva, Switzerland. Their “J.B. Champion Platinum Observatory Chronometer” became the most expensive watch-only timepiece ever sold, for an amount slightly below $4 million.