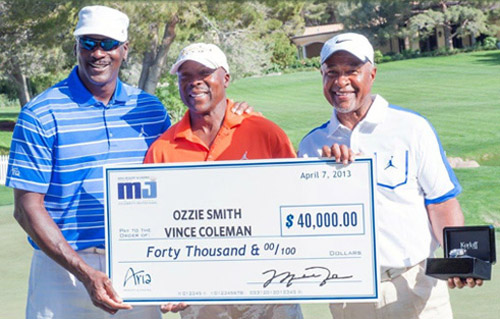 Hosted once again at the ARIA Resort & Casino at Shadow Creek golf course, the Michael Jordan Celebrity Invitational returns to Las Vegas for the fourth year in a row.

It’s a great golf tournament and draws the biggest names in sports and entertainment. It includes four days of competitive golf and special events, in addition to raising money for several worthy charitable organizations.

Each year, the Michael Jordan Celebrity Invitational (MJCI) brings in an all-star lineup of both celebrities and athletes. Sports stars Wayne Gretzky, Ken Griffey, Jr., Dara Torres and Brian Urlacher, plus actors Anthony Anderson, Brian Baumgartner and Jesse Metcalfe are all scheduled to be part of this year’s golf event.

The event has been a huge, charitable boom. Since it began back in 2001, MJCI has raised almost $7 million for various, notable charities including – James R. Jordan Foundation, Keep Memory Alive, Opportunity Village and Cats Care, the NBA’s Charlotte Bobcats’ charity arm and this year’s beneficiaries – the Make-A-Wish Foundation.

Michael Jordan was quoted, “Each year, MJCI gets even better. I’m excited to partner once again with ARIA and Shadow Creek to host this incredible event and support some very worthy causes. Our guests, sponsors and fans had an amazing time last year, and we’re looking forward to another great weekend.”

The two rounds of the Celebrity-Amateur Competition, which pairs one celebrity golfer with four amateur participants, will happen on Thursday, April 3 plus Friday, April 4 at gorgeous Shadow Creek.

Next, the Michael Jordan Celebrity Invitational two-person, 36-hole scramble format tournament starts on Saturday, April 5 and finishes up with only the competing celebrities. The second and final round of MJCI will be played on Sunday, April 6.

Don’t miss this exclusive event and get your tickets early. Daily or weekly general admission and VIP ticket packages are available.

To purchase your tickets to the Michael Jordan Celebrity Invitational golf tournament at Shadow Creek in Las Vegas, please contact The Life of Luxury and we can assist you with all your trip reservations.