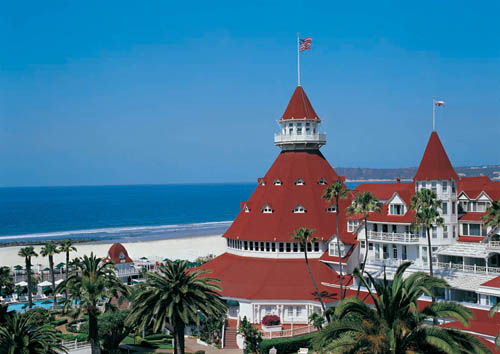 The beachfront luxury hotel, the Hotel del Coronado, just across the bay from San Diego, CA, will celebrate its 125th anniversary in 2013 with a yearlong calendar of activities and a series of community events, charitable promotions and guest packages.

Never-seen-before images will be featured in the release of a 208-page coffee-table history book including behind-the-scenes snapshots of Marilyn Monroe during the 1958 filming of Some Like It Hot! Go back in time and relive the resort’s earliest days with vintage memorabilia … menus, brochures and personal photos dating back to the 19th century.

As stated by historian Christine Donovan: “Many hotels could not survive the long years of the Great Depression and World War II, but, again, wartime build-up favored The Del with an influx of Navy, including fighter pilots trained in Coronado and housed at the hotel.” According to Donovan, after the war, massive urbanization efforts brought down many of America’s last surviving grand resorts, leaving the Del as one of a very few to remain.

The famous Hotel del Coronado has long been popular with ghost hunters.  For many years, the luxury hotel near San Diego has had reports of a resident ghost.  Here’s a link to a ghost story article we published several years ago.

In honor of this 125 year milestone, the Del is helping to fund a year –long partnership with United Through Reading (UTR). This national military program gives deployed parents the opportunity to read and record books for their children to watch as DVDs helping to ease the stress of separation. With the sale of each new coffee-table history book, the hotel will donate $1.25 toward this program and will sponsor additional fund-raising events throughout 2013.

Activities planned for the anniversary include citywide historic exhibits, special events and a variety of historic-themed offerings. The following guest packages are also available:

*Rate shown is based on two-night minimum stay. Does not include tax. May not be combined with other offers.

Please use the Contact Form below to submit your Hotel del Coronado in San Diego travel request. We will promptly get back to you.