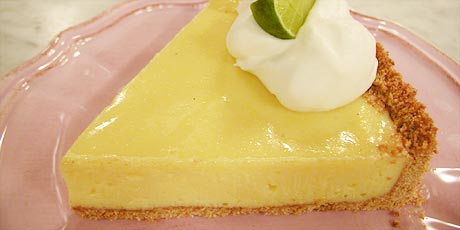 Key lime pie, a dessert synonymous with south Florida and the Florida Keys, is as rich in history as it is in calories. It is also deceptively light and delicious — and very easy to make.

Sometime in the late 1800s, after the Civil War, the pirates who inhabited Key West grew tired of chasing down ships and stealing their cargo. The presence of the American Navy was making it more difficult. Wreckers, only slightly more legitimate than pirates, were having similar problems.

These founding fathers of the Florida Keys salvaged cargo from ships run up on the surrounding reefs, sometimes carelessly, and sometimes guided by false signals set out by the wreckers themselves. The infamous pirating banquet was over. It was time for dessert. This is when Key lime pie was invented.

There are nearly as many theories about how Key lime pie was first invented as there are styles of pie but, necessity being the mother of invention, a few basic fundamentals prevailed.

There was no refrigeration in the Florida Keys at the turn of the 19th century, therefore little fresh milk. The only milk readily available was canned. The Florida Keys are hot and not the most pleasant place to fire up an oven to bake, so a “no bake” dessert was desirable. Chickens roamed the island then, as they do now, hence plenty of fresh eggs.

And finally, limes, first imported from Persia, grew both wild and cultivated all over the Keys until they were eventually wiped out by hurricanes and replaced, after the Keys Highway was built, by winter dwellers called snowbirds, marinas and gift shops.

The most authentic recipe for Key lime pie I have found is on the back of the bottle containing Nellie and Joe’s famous Key West lime Juice. If Nellie and Joe’s is not available at your local grocery, it can be purchased on line at www.keylimejuice.com.

To make one small pie, you will need a 9-inch graham cracker pie shell, one 14-ounce can of sweetened condensed milk, 3 egg yolks and Key lime juice. You cannot use a sweetened lime juice like those commonly used for cocktails. They are simply not acidic enough to “cook” the egg yolks.

The juice from fresh limes commonly available is chancy. Use Key lime juice. Originally Key lime pie was not baked. The pie would set from the reaction of the eggs and lime. Today the pie is slightly cooked to avoid salmonella contamination.

Combine the egg yolks and condensed milk in a stainless or glass mixing bowl (the lime juice is too acidic to put in aluminum) and blend it with a wire whisk until it is smooth and uniform in color. Then add the lime juice and mix thoroughly again. Pour the mixture into the pie shell and bake it slightly for 15 minutes at 350 degrees. Let the pie stand for ten minutes and serve it topped with whipped cream dolloped on when serving.

Dollop is a culinary term used to describe a serving bigger than a dab and neater than a glob. It is applied with an artistic flip of the wrist. You can chill a Key lime pie for several days but the crust absorbs moisture over time. Use paper thin slices of fresh lime to make a feathery garnish.

A 9-inch shell will feed six people — perhaps eight, but not any eight people I know. I like to use a 10-inch deep shell so everyone can have seconds. Ten-inch deep pie shells are readily available in grocery stores. To fill a 10-inch shell, simply double the recipe. Doubled, it fits perfectly in the larger crust. Don’t ask me to do the geometry, it just does.

Native Key Westers, affectionately called “Conchs” after the delicious mollusk that populates the sandy bottoms of the water surrounding the Keys, argue that a standard pastry crust was the original base for Key lime pie. If you prefer this type of crust to graham crackers then by all means use it. It must be pre-baked of course, and it’s a lot more work.

Some traditionalists argue that the original pie was topped with meringue. I like it prepared that way and it’s a great way to use the left over egg whites, but keep in mind meringue gets sticky in humid summer weather so use meringue only if you are serving the pie immediately.

I make meringue without a recipe. I sweeten it proportionately to compliment whatever I am adding it to. Make it just semi sweet for this dessert. Whip the egg whites in a chilled stainless bowl until they begin to form soft peaks and then add confectioner’s sugar and a little vanilla to taste. Continue whipping until the peaks are firm and stand alone. Spread the meringue on the pie with a rubber spatula or decorate the top with a star tube in a pastry bag.

Key lime pie and strong espresso or a cup of French roasted coffee finish a summer meal with a light tropical touch. The combination is a refreshing alternative to heavier chocolate desserts. A glass of chilled dessert wine along side would be as rich as pirate’s treasure.

Muscat comes to mind for its sweet tropical fruit flavors and because, if I really wanted to wreck and plunder a pun, pirates kept one in their belt — right next to their sword.

Jack Felber is a regular Times columnist. He and his wife, Marcia Felber, are proprietors of the The Olympia Tea Room, a Wine-Spectator-recognized harborside restaurant in Watch Hill, R.I. Jack can be reached at jack@olympiateroom.com