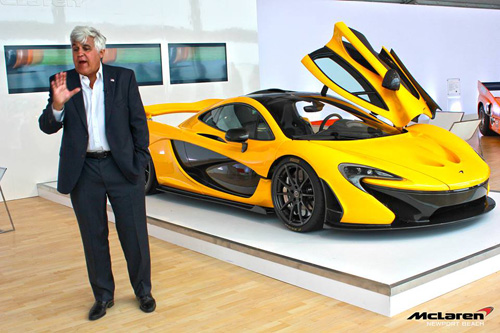 The new 2015 McLaren P1 that Leno purchased is a striking yellow color with a sleek, yet powerful style. First we see the McLaren P1 unveiled in a SoCal showroom, then drive by Jay to his famous garage where he displays incredibly expensive cars.

Jay Lendo is then joined by McLaren CEO Mike Flewitt who discussed how the McLaren P1 supercar was developed and the thought process to making a limited production run of only 375.

Next it’s off for a real life test drive as Jay and Mike talk about the many features of the new 2015 McLaren P1 luxury car.

Interesting that Jay usually keeps his cherished luxury cars preserved in his amazing car garage but mentions he already has over 1,000 driven miles on his new 2015 McLaren P1.

So sit back, relax and enjoy the sound of pure power from the McLaren’s twin-turbo engine as Jay drives through the mountains. By the way, it’s a hybrid car so what more do you need? The 2015 McLaren P1 has five different driving modes – sport, hybrid, electric, track and race.

If you are interested in purchasing a supercar like this new 2015 McLaren P1 or another luxury car brand, please contact The Life of Luxury and we can assist you with the car research and buying process. You like reading about supercars, follow this luxury blog for the latest new car news.