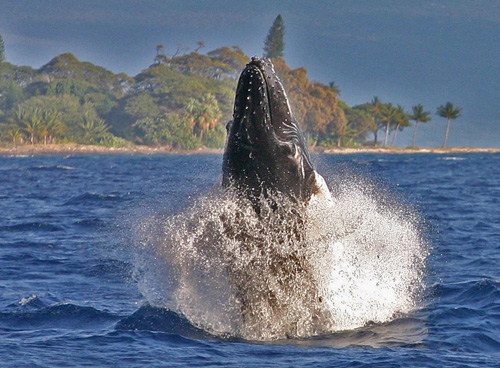 The Kalaupapa National Park resides on the northern shoreline of Molokai and is known for its exceptional scenery and natural attractions.

However, during the winter months, from usually November to April, tourists from around the world will flock to Molokai to try to catch a glimpse of the migrating whales.

Large numbers of North Pacific humpback or kohola whales are often clearly visible from the elevated areas of Kalaupapa National Park. Humpback whales will migrate in the channel between Molokai, Maui, and Lanai. Whale watchers can also spot dolphins, which swim around the island throughout the year.

The gentle giants of the Pacific Ocean come to the warm Hawaiian waters every year to breed and give birth to new whale calfs. It’s best to schedule a tour or charter a boat to spot these magnificent creatures up close.

There are several, seasonal whale watching tours that regularly depart from Kaunakakai Harbor. Those excursions provided by the Molokai Princess are particularly notable because they allow passengers to get much closer to this gentle giants.

Bringing your camera is an absolute must to catch unbelievable images of nature.