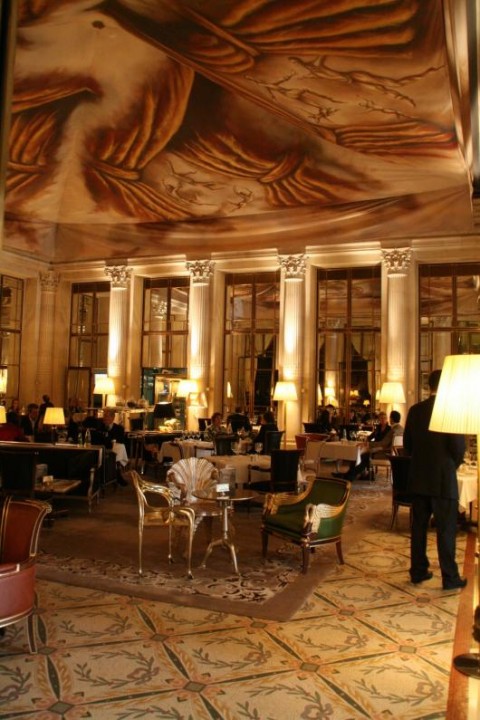 Nicknamed “The Hotel of Kings”, the Meurice has played host to everyone from Queen Victoria and the Maharajah of Jaipur to the King and Queen of Spain. For more than a hundred years the Meurice has been, for many, the quintessential French hotel.

Reflecting its uninterrupted attachment to the French art of living, Le Meurice is a magical, serene place, where the refined splendours of 18th-century architecture meet the latest in contemporary comfort and elegance. It was the place you went to for Brillat-Savarin-esque banquets and to sip tea in the red velvet salon.

And since its renovation, the Meurice has taken French-ness to new heights. Waiters swish by with their noses in the air. If you order a simple piece of toast, expect it to come on an enormous silver trolley.

Here, too, as the seasons pass, are born the creations of Yannick Alleno, the chef of the renowned restaurant, Le Meurice. Drawing his inspiration from the gastronomical treasures that abound in the Parisian region, this young French chef adds a daring touch to traditional dishes, creating a delicious, and whimsical link between past and present. The spa meanwhile offers treatments using grapeseed oil from nothing less than Château Lafite grapes.

Purists still prefer the slightly dilapidated elegance of its former reincarnation but it’s hard not to be impressed by the massive entrance across from the Tuileries and the marble interior with its chandeliers and priceless mosaic floors. The restaurant is one of the most beautiful in the city, three-tiered candelabras illuminating the heavy damask tablecloths and Limoges porcelain.

And every room is packed to the gills with an excess of old master paintings, Oriental rugs, Louis XV, XVI and Empire furniture. Bathrooms are enormous and marble, with tubs that fill in the blink of an eye, and super-sized showers that sport high speed jets.

You’ll find that the French-ness of the Meurice extends to the staff as well. Service is Gallic in both efficiency (very efficient) and in attitude (a lot). Doormen and porters who guard the door are intimidating figures who, with ineffable snobbery, act as hotel bouncers, deciding who belongs to the Meurice and showing others firmly out.

Meanwhile, the concierge will fetch your dry cleaning, fix your cellular telephone, and reserve your theatre tickets. Nonetheless, breakfast in bed at the Meurice is guaranteed to cure any ill. A white-sheeted trolley, a rose on the tray, a lot of silverware and truly ethereal croissants, while the daylight streams gently in. It’s the ultimate Parisian experience. Source: TabletHotels