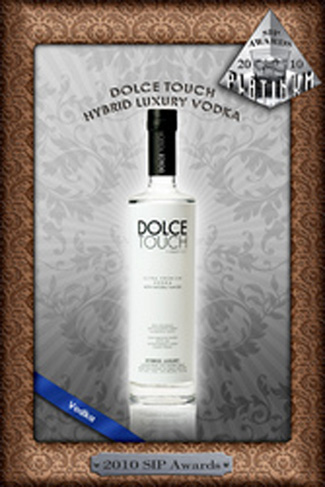 Matthew A. Leang of Dolce Touch LLC was quoted, “As a newly launched company, it’s truly an honor to receive the platinum medal at the 2010 SIP Awards. Dolce Touch By Dolce Touch has a unique and smooth taste, and we’re just thrilled to be recognized by consumers as an award-winning vodka in the spirits industry.”

This was the second year for the SIP Awards. The event is the only international spirits competition made up of a panel of very knowledgeable consumer judges, who importantly remain unbiased as industry outsiders.

In the 2010 event, 162 spirits competed to impress consumers in the important categories of aroma, taste, and finish.

When producing a luxury vodka, there are numerous factors that need to be addressed, including taste, quality, and value.

The SIP Awards granted bronze, silver, gold and platinum medals to the top spirits from around the world.

The judging was based on blind taste testing, which ensured the panelists were truly unbiased and not affected by a brand’s marketing or branding strategies. The spirits then can be judged solely on quality.

“Quality, taste, and value are so essential when producing a luxury vodka,” Leang said, “and this platinum award is just a testament to the quality of our spirits.”

Dolce Touch Hybrid Luxury Vodka is available in the state of Washington through special order (brand code #973902) and has just recently entered into the California market.