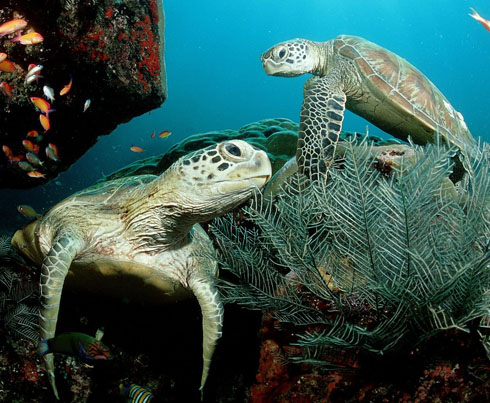 One of the most amazing and beautiful creatures in the Hawaii Islands is the Green Sea Turtle, or honu. These graceful animals inhabit the warm waters of Hawaii, as well as many other places around the world.

The honu have long been featured in Hawaiian mythology, petroglyphs and as aumakua (personal family gods). Early Hawaiians used the green sea turtles as a source of food, tools and even ornamentation.

But more importantly, native Hawaiians made sure they kept their use of the green sea turtle in balance with nature.

Green sea turtles, Chelonia mydas, actually got their name from the color of their body fat. It’s green from the algae or limu they eat.

The exact life span of sea turtles is not clearly understood. Hawaiian green sea turtles appear to grow quite slowly in the wild. The turtles typically take between 10 and 50 years to reach sexual maturity, about 25 years on the average.

Even though the green sea turtles live the majority of their lives in the ocean, the adult females must return to land to lay their eggs. Biologists believe that nesting female turtles return to the exact same beach as where they were born. This beach is referred to as a natal beach.

An interesting fact is that the green sea turtles nest only at night. The female turtle labors by pulling herself out of the ocean water and crawl to the dry sand of the upper beach using only her front flippers.

Sadly, many of the turtle’s newborns do not reach the ocean. Some are grabbed by hungry crabs and other predators along the way. Some become lost and eventually die. Even the ones who make it safely to the sea are not safe. They can be eaten by sharks and other carnivorous fishes. Only a few baby turtles from each nest will survive all the way to adulthood.