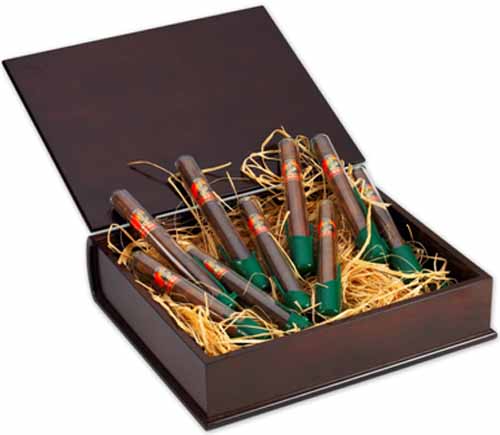 The high end cigar market has definitely changed over the past several years. There has been a strong emergence of U.S. based cigar companies. Legendary Gurkha cigars is clearly the leader.

The worldwide economic slump has hit the Cuban cigar industry hard, but Miami based cigar company – Gurkha, is doing quite well. Gurkha continues to be awarded some of the highest honors in the cigar industry.

Looking for the perfect gift for that man in your life or a friend, relative, co-worker, boss, etc… can be a challenge. Maybe this is the ideal gift for him.

You can’t find anything better to go along with a bottle of holiday cheer, than a limited edition, $1,500 His Majesty’s Reserve Gurkha Cigar.

The His Majesty’s Reserve cigar by Gurka or as it’s more commonly known – “HMR”, is the world’s most expensive cigar.

During the time of British rule in India, colonial soldiers began rolling their own cigars from the local tobacco. Back then, the British held a fondness for the legendary Nepalese fighters and they inspired them to name their cigars “Gurkhas.”

What makes luxury cigar maker Gurkha unique is they combine both art and taste to offer a unique, but total overall experience to the cigar consumer.

Gurkha cigars are made from the world’s finest tobaccos and spices.

Blended by Kaizad Hansotia, each Gurkha cigar is a true masterpiece that both inspires and celebrates the rich art of a hand-rolled cigar.

Many of the most famous and expensive of cigar brands sell their cigars in a plain cedar box. But unlike those other cigar companies, all fine-made Gurkha cigars come packaged in a work of art. Each Gurkha cigar container reflects the product line’s individual character and unique traits.

So whether you are a seasoned cigar aficionado or a novice smoker, an extremely unique Gurkha cigar, such as the $1,500 His Majesty’s Reserve Gurkha Cigar …. can be truly enjoyed by all.

For information on the Gurkha His Majesty’s Reserve Cigar plus all Gurka cigars please visit: http://www.gurkhacigars.com/cigars.cfm