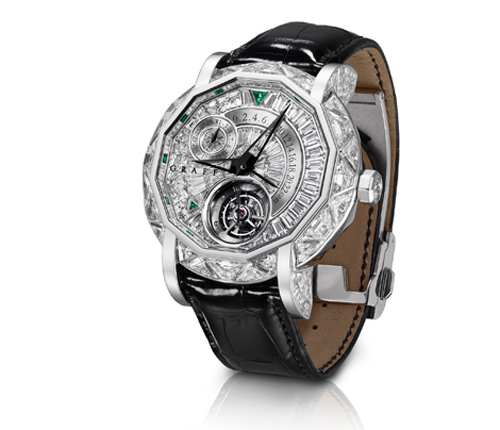 Luxury jewels and timepiece maker Graff, recently announced at BaselWorld 2010 that the company will introduce its own watch movement. The design will be titled, “Graff Calibre 1.”

The new watch movement will beat at 28,800 vph and also have a power reserve of 50 hours.

At a later date, Graff will roll out an automatic movement watch. Next will be a chronograph. Each new version will keep with the newly named “Calibre” nomenclature (i.e. Calibre 2, Calibre 3, Calibre 4, etc….).

Also at the show, Graff presented its latest dress watch, named “MasterGraff Tourbillion”, in platinum. The luxury watch will be limited to only five pieces and will include 300 diamonds totaling about 35 carats.

The MasterGraff Tourbillion will feature a bezel set with 24 large stones, plus the rotor and bridge will all be set with baguette diamonds.

In addition, you can see the Graff Luxury Watches signature emerald triangle, set at both the 12 o’clock and 7 o’clock position.

Retail price for the MasterGraff Tourbillion will be $1.5 million.