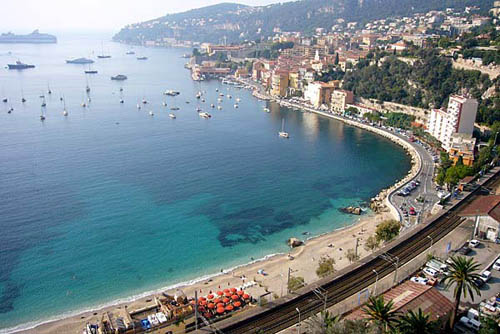 The dark, enchanting blue of the Mediterranean, white grains of sand from the beaches of the coast, and the serenity that murmurs quietly in distant city sounds.

These, mixed with the fresh air, tinged slightly with salt from the sea, and a gentle breeze that appears near ceaseless, are what make a Cote d’Azur villas nothing short of but, entirely and completely, a paradise.

Cote d’Azur, a hybrid name inspired by the French word for gold and the azure blue of the Mediterranean Sea, is deservedly and well named.

The beautiful coast of the South of France has been a tourist hot spot for centuries, and many of the first visitors to this luxurious landscape were royalty and aristocracy from around the world.

The cities that line the coast, Nice, Cannes, and St. Tropez, are famous for not only their beautiful views, but also the wonderful culture and architecture that these cities have been built upon and around.

It is no wonder then, that such a place has drawn so many famous writers and artists from around the world as well, hoping to catch a spark of inspiration from its calming beauty. In the past, greats such as Pablo Picasso and Edith Wharton visited, lived in and worked on the Cote d’Azur.

Today, celebrities like Elton John and Bridget Bardot have even made their homes on the French Riviera.

Cote d’Azur is a dreamlike haven for foreigners and locals alike, as the weather that permits outdoor activities and relaxation stays relatively moderate year round.

In Cannes, it has been boasted that the city regularly receives sunlight for twelve hours a day, almost every day. Rich in history, culture, beauty and still so full of a sweet piece of calm, Cote d’Azur calls out to the heart of the weary and wishful, offering rest and peace.

Many visitors to the city often rent or stay in hotel rooms or suites, if only to rest for a bit when running low on energy from enjoying all that Cote d’Azur has to offer. But, for an optimal experience on the French Riviera, it may be better to stay at a villa.

While it may be an interesting enough experience to run into and listen to other foreigners and visitors to the coast, for a more private and focused stay a hotel does not offer the same feeling as a villa might. Crossing paths with strangers on the street, is very different from brushing shoulders in a crowded lobby or narrow hallway.

To stay in a villa is similar to staying in a vacation home, providing one with a more authentic and at-home feeling. Enjoying a drink on a private deck or patio as the sun sets is a surprising amount more serene than staring at the sky through a hotel room window.

The sun continues to shine over this French vacation spot, and all that is left is for more people to see and take in for themselves, the blue gold that is Cote d’Azur.