Flying SUV’s In The Sky 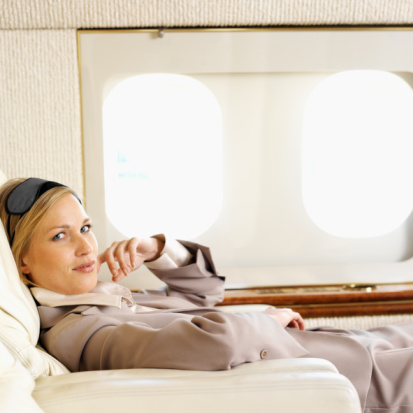 Personal jets have long been the preferred transportation choice of execs and the rich & famous. In fact, most top executives will do anything to bypass the delays and hassles of commercial air travel.  A growing number of pilots, day trippers and business travellers with some extra dollars are finding a new way to join the jet set.

Small private planes better known as “very light jets,” or VLJs, are starting to appear in the sky and on the tarmacs of small local airports across the country. Several companies plan to amass fleets of the new VLJs and offer air-taxi and on-demand charter flight services once they get federal approval.

First-hand displays of the aircraft, called the “SUVs of the sky,” drew scores of curious aviation buffs at a recent trade show in Hartford, CT for private pilots and aircraft owners. But while several of those attending already own small propeller-driven planes, they said their bank balances fell far short of the $1.6 million to $3 million needed to buy one of the little jets.

“If I had an extra million and a half on hand, sure, I’d buy one. I’d have to win the lottery first,” said Lars Margolies of Gardiner, N.Y., eyeing one of the jets at Hartford’s Brainard Airport with New York City resident Rob Boettcher.

Boettcher, who currently owns a four-seat Piper Archer, said very light jets are getting a lot of buzz in circles of aviation because they are extremely attractive to people who want to upgrade, and because of the potential cottage industries that new air-taxi services could spawn.

Among those services: Linear Air of Concord, Mass., already has one of the mini-jets and four more are expected to arrive in the next several months. The company plans to expand its fleet to 15 sometime in 2008. Linear Air already offers charter flights on eight-seat Cessna Caravan turboprops, but company president and CEO William Herp said the new jets – which will carry two pilots and three passengers – are lighter and faster. It will start using its new jet as soon as the Federal Aviation Administration gives the go-ahead, he said, adding he hopes that will be sometime this fall.

“We have customers chomping at the bit to try them. I literally get e-mails and phone calls every day from people with questions about it,” Herp said.

Another company, a Chicopee, Mass.-based startup called Pogo Jets, plans an initial public offering of stock to raise money to order more than two dozen of the jets, with an eye toward launching service in 2009. Pratt & Whitney Canada, a division of Hartford-based United Technologies Corp., manufactures the PW600-series engines used by many mini-jet makers. The engines, small enough to fit in the trunk of a midsized car, can be built in eight hours each, and can power a little jet for more than 1,600 kilometres on a single tank of fuel depending on weather conditions. In fact, the mini-jet market has helped Pratt & Whitney’s Canada operation become its fastest-growing segment, Pratt spokeswoman Jennifer Whitlow said. It expects to deliver more than 3,000 of the engines to customers this year, she said.

“Pratt took a big and ambitious dive into the market, and going with them was one of the best decisions we’ve made,” said Andrew Broom, a spokesman for Albuquerque-based Eclipse Aviation, which is using Pratt engines on its new Eclipse 500 VLJ.

That craft, which starts at $1.5 million, was certified by the FAA in 2006. Those are the jets that Linear Air already has on order, and which Pogo Jets hopes to acquire. Eclipse has more than 2,600 orders for its new jet, which can be equipped with leather seats, an entertainment system with satellite radio and other perks. More than 50 of the planes already have been delivered to buyers.

The slightly larger Citation Mustang personal jet, produced by Wichita-based Cessna Aircraft Co., also received the FAA’s approval in 2006. Cessna has been building Citation planes since 1973, and its Mustang VLJ started drawing interest from potential buyers almost immediately after it was announced in 2002.

While some air-taxi services have favoured the smaller Eclipse jets, many well-heeled industry leaders, companies and individual plane owners and pilots have gravitated to the Cessna Mustang. And as with Eclipse, demand for the Cessna has been so robust that it’s outpaced supply. A Citation Mustang ordered today, costing between $2.5 million and $3 million, will be on the owner’s tarmac in fall 2010.