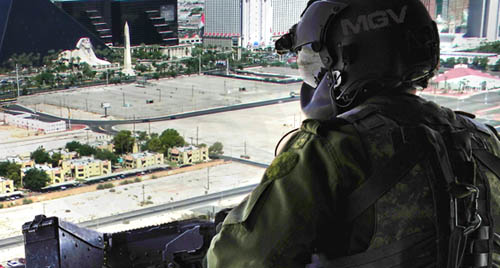 Every detail of the new Machine Gun Vegas is meticulously cared for to ensure the highest-class gun range experience, in the true Las Vegas fashion.  The ultra lounge is staffed with fully trained “Gun Waitresses” that offers a cocktail of gun cocktails.  In addition, they also give you the opportunity to try out a million dollars’ worth of guns.

Further adding to its intrigue, the Machine Gun Vegas has several gun themes.  The most notable ones being the MOB, The Femme Fatale, SEAL Team VI, World @ War, and The Elite.  The MOB is a blend of weaponry used by the Mafia in Las Vegas, including the Thompson, an Amphibian S pistol suppressor, and the Mossberg 590A1 12 gauge shot gun.  All of which has been seen at one time or another on mob movies.

The Femme Fatale consists of the Uzi and different types of handguns, all light in weight and easier to control.  In the late 1940’s, Major Uziel Gal created the first Uzi sub machine gun. The gun was utilized as a personal defense weapon for tankers, artillery troops, and officers.  It was also used as on the frontlines by elite infantry assault forces.

The SEAL Team VI gives the guests a chance to live the fast-paced dangers of the famed military squad.  This package includes a pistol with suppressor designed to be lightweight, improved accuracy, and extended service life.  The Amphibian S, featured in this package has 13 variations spanning 29 years, making it the most advanced and sought after integrated .22 caliber suppressor system in the world.

Next featured in the SEAL Team VI is the MR556A1, a premium level commercial and civilian semi-automatic rifle.  This class of firearm has been made popular as the civilian version of the gun that was used in the recent, high profile Operation Neptune Spear.  The M249 Squad Automatic Weapon (SAW) machine gun and the M60 rounds out the SEAL Team VI weaponry pack.

World @ War features close and long-range firearms mainly used in military combat.  This includes the M1911, a single, semi-automatic, magazine-fed, and recoil-operated handgun designed by John M. Browning.  It was commonly used in both World Wars, the Korean War, and the Vietnam War.  The MP 40 (the “Schmeisser”) is the successor of the MP 38 and is a submachine gun created in Nazi Germany to be used during the second World War.  You may recognize it from movies like “Schindler’s List” and “Saving Private Ryan”.

The Elite is one of the most premium packages Machine Gun Vegas has to offer.  It includes the M249 SAW, handguns, semi-automatics, and full automatics for a complete shooting experience.  It covers firearms used by the United States armed forces as well as military forces from around the world.

Machine Guns Vegas offers complimentary transportation to and from your Vegas hotel.  But be forewarned that this new kind of ultra lounge is definitely not for the weak of heart. They don’t do single shots, but round after round of pure guns. It is truly Las Vegas on Full Auto.