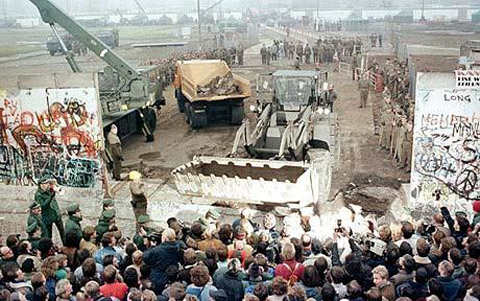 It’s hard to be believe it’s been 20 years since the fall of the mighty Berlin Wall in Germany.  The wall that divided East versus West and divergent ideologies is gearing up for a huge celebration.

Arguably the most moving historic moment of the 20th century, was the ultimate fall of the Berlin Wall. 2009 will mark 20 years ago this year– was an unforgettable triumph.

Not hard to imagine that Germany is scaling up for a huge celebration and is planning an array of exciting events to commemorate this momentous occasion.

Berlin, now country’s capital, is a haven of creative design and hip cultural delights – is throwing a year-long party for the world to enjoy.

In May, visit the launch of an open-air exhibit on Alexanderplatz (formerly in East Berlin) about the fall of East Germany’s communist government. From November 7 to 9, a three-day “Festival of Freedom” will take place at the Brandenburg Gate in Berlin. This historic event will be “culminating in a multimedia recreation of the wall coming down.”

If you are looking for a luxury hotel during your stay in Berlin, Germany ….. try these favorites:

Hotel de Rome: Housed in a historic bank building (with the bank vault converted into a pool) and boasting panoramic views of the city’s attractions, this hotel is a member of the prestigious Rocco Forte Collection. Enough said.

Hotel Adlon Kempinski: A fixture on the Conde Nast Traveler Gold List, this illustrious hotel is actually offering a special package to celebrate the 20th anniversary of the Berlin Wall’s demise, which includes a guided city tour of Berlin’s historic sites.

Kempinski Hotel Bristol: The first five-star hotel to be rebuilt after the war and a symbol of Berlin.

Ritz-Carlton Berlin: The posh hotel features the La Prairie Spa pool. Bathrooms in the guestrooms are just as sumptuous and spa-like.

Hotel Concorde: The sleek hotel is all about design with stylish minimalist interiors with lots of contemporary art.