Enjoy the Lush Garden Isle of Kauai, Hawaii from Above – By Helicopter 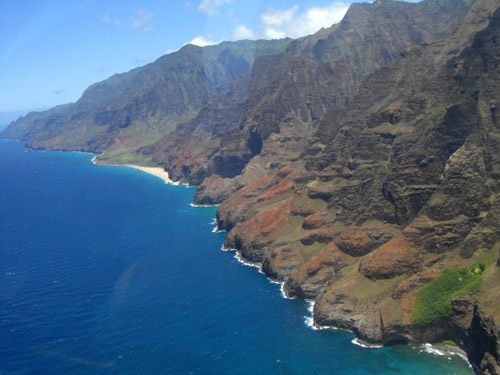 There is no better way to experience the sheer beauty of Kauai, than by a helicopter tour. To uncover the secrets that Kauai has to offer, you need to go deep into the rain forest behind the mountains.

You have several choices of helicopter tour companies on Kauai, but there’s only name that is synonymous with excellence and safety – Blue Hawaiian Helicopters.

Blue Hawaiian Helicopters is the largest and most successful helicopter tour company in Hawaii. They are the only tour company that provides tours of all the major Hawaiian islands including Oahu, Maui, Kauai, and the Big Island.

All that rain on the Garden Isle has to go somewhere. The rainfall generates the most incredible waterfalls that cascade into amazing sheer valleys and down jagged cliffs that seem to fall straight into the Pacific Ocean.

After a safety video and review of the do’s and don’ts, we headed off to the heliport at Lihue airport to begin our tour. Blue Hawaiian Helicopters has an amazing safety record and is the recipient of numerous awards including the Certificate of Excellence “Diamond Award” from the Federal Aviation Administration. 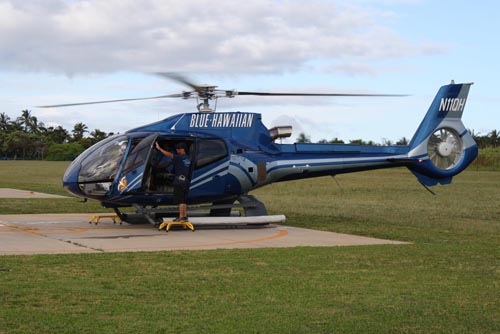 The new American Eurocopter ECO-Star helicopter was top notch and is regarded as the first touring helicopter of the 21st Century. The ECO-Star is roomy and reduces flight noise by approximately 50%.

As we take off and see the expansive blue waters of the Pacific Ocean to our east, you quickly realize this is going to be an incredible journey. We saw a diverse landscape during our nearly one hour helicopter tour. 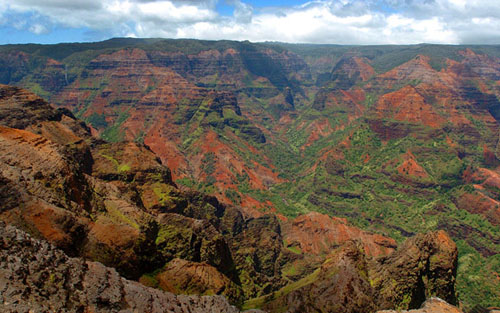 We saw spectacular Hanapepe Valley, then on to Mana Waiapuna, which is better known as “Jurassic Park Falls.” We passed over Olokele Canyon, before flying over incredible Waimea Canyon, named by Mark Twain as the “Grand Canyon of the Pacific.”

Our pilot was professional and offered a detailed narrative via the headphones which allowed for two-way communication with him.

As we continue over the northwest corner of the island, the sheer cliffs and caves of the Na Pali Coast await – stretching 11 miles on Kauai’s northern shore. What a sight as we hug the coast and seem miniscule in comparison to the jagged vertical cliffs of Na Pali. Lush vegetation, white sand beaches and pounding surf are everywhere. 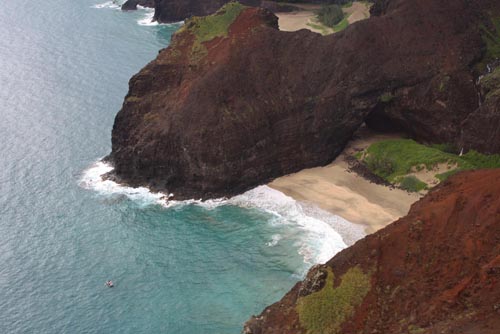 We pass by the Bali Hai Cliffs, and hover over the blue waters of stunning Hanalei Bay, then continue to the nearby Princeville resort area.

Mt. Waialeale is often covered in thick clouds, producing all that rain. Luck was with us that day as clouds opened up and we flew directly into the center of the crater! Mt. Waialeale was majestic with 5,000 foot walls towering above and 3,000 foot waterfalls cascading down its sides. Truly an amazing site! 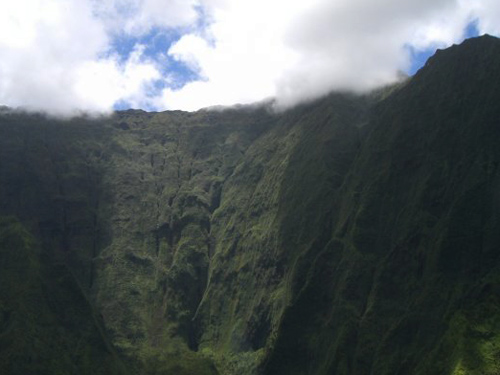 As we returned to the heliport, the six passengers all realized what an incredible experience we just had. The ECO-Star’s large glass windows provided excellent sweeping views of Kauai’s natural beauty.

Overall, our experience was terrific and memorable. The office personnel, ground crew, and the pilot were superb.

If you do get the chance to visit Kauai, make sure you plan a helicopter trip. Discover the true beauty of Kauai. It’s an adventure you’ll never forget.