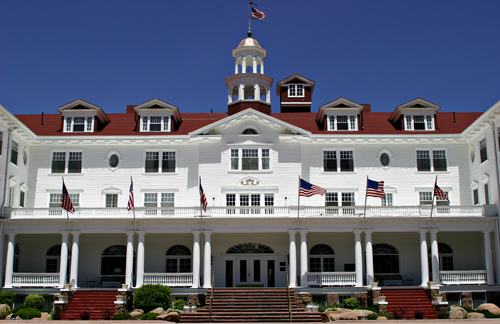 As Halloween nears, there aren’t many other people that come to mind when thinking about scary stories, than horror author Stephen King.

If you live in Colorado or thinking about a visit over Halloween, then here are some sights that are sure to be on the top of your spook list.

Now experience the “real” ghosts of Colorado and stay in the haunted hotel that motivated Stephen King to write his popular novel, The Shining.

You can also take a lantern-lit tour of the cemetery where gun-slinger “Doc” Holliday is buried or race coffins down the street in memory of a 19th century girl who haunts historic Manitou Springs.

With Colorado’s rich history comes a variety of famed ghosts who are dying to meet you for Halloween this October.

For example, spend a night in Estes Park at the place that inspired Stephen King to write the novel, The Shining.

What makes the Stanley Hotel truly unique is the presence of otherworldly residents including the first owner’s  long-deceased wife, Flora Stanley, who allegedly can still be seen and heard playing the piano.

The fourth floor and room 418 seem to have the most ghostly activity reported. For the ultimate scare (or inspiration), stay in room 217 – where King himself stayed. Hear the hotel’s legendary ghost stories and sightings and visit the most
haunted places in the hotel during a historic ghost tour, participate in a professional paranormal investigation or celebrate Halloween with a murder mystery dinner and a “Shining Ball.”
www.StanleyHotel.com

Coffin Races in Manitou Springs: The legend of Emma Crawford lives again on October 30 during the annual Emma Crawford Coffin Races up Manitou Avenue. Costumed impersonators of Emma, a 19th-century local who was buried on nearby Red Mountain, ride on coffins pulled by teams of mourners. She supposedly still haunts the mountain even though her coffin washed away years after her burial.
www.ManitouSprings.org

Ghosts and Graveyards in Glenwood: Stay at the haunted Hotel Colorado and catch a glimpse of the murdered chambermaid who appears at night near the Devereux dining room or the ghost of the young girl who died at the hotel. If the ghosts at the Hotel Colorado aren’t spooky enough, take a lantern-led tour of Linwood Cemetery where  Glenwood’s past is resurrected. Hear the haunting graveside tales of John “Doc” Holliday, Kid Curry, as well as the  stories of miners and pioneers.Weekend tours begin October 15 through Halloween.
www.GlenwoodHistory.com

Ghouls Night Out in Ouray: Enjoy your favorite beverage and talk about the haunted history of Ouray in the Beaumont Hotel where you might meet the ghost of the murdered young woman who lives there. Price includes room for two at the Box Canyon Lodge & Hot Springs in Ouray, two drinks at the Historic Beaumont Hotel and two haunted history tours through Ouray for only $139. Package available Wednesday – Sunday nights in October. www.BoxCanyonOuray.com

Spirits in the Denver Botanic Gardens: Denver Botanic Gardens was once a part of the City Cemetery in the mid-1800s. Take a Ghosts in the Gardens Tour for chills listening to the recount of decades of the paranormal through eyewitness reports from past and present gardens staff. Enjoy a night of storytelling through visual and verbal tales throughout the gardens, and in the dining room at the Waring House mansion, which was built in the early 1900s. Bring your voice recorders and cameras to see if you capture something from the other side. Tours take place October 15, 23, 29 and 30.
www.BotanicGardens.org

Horror Show Film Festival: a 3-day horror film festival in world-famous Telluride, Colorado. For three days, film fans will experience the latest horror, fantasy, and sci-fi films in Telluride’s historic Sheridan Opera House and Nugget Theatre. If you love genre flicks and the scary spooks of Halloween, then you don’t want to miss this festival
www.telluride.net/horror-show-film-festival