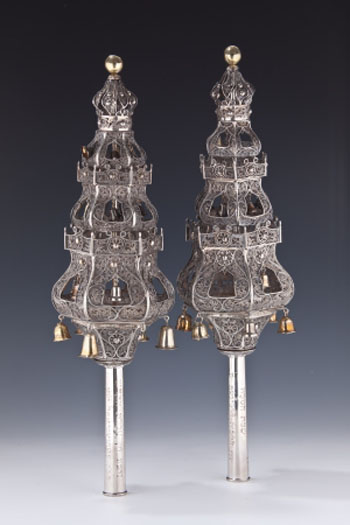 J. Greenstein & Co. is scheduled to host its next bi-annual auction on January 10th at 6PM (Auction registration opens at 5PM)

The J. Greenstein & Co. Auction House is currently the country’s only house completely devoted to the sale of holy Jewish ceremonial objects.

The highlights of the upcoming auction feature an extremely rare pair of Torah Finials (circa 1870) estimated between $35,000 to $40,000. Also up for auction is an engraved Silver Spice Tower dating back to a couple’s silver wedding anniversary in 1936.

These two auction item as well as others are are all rare mementos of time and culture at various points in Jewish history.

Greenstein’s Auction House has risen to fame over the years, by hosting celebrity Judaica including Sammy David Jr.’s personal menorah, plus items from victims of the Bernie Madoff scandal.

Greenstein recently launched the only Jewish Museum type of gallery in Cedarhurst, NY where collectors and enthusiasts are able to buy select Judaica artifacts that are on display. The gallery, based in a 1200-sq-ft location, hosts numerous historic pieces from around the world – many of which will be featured in the annual auction and many others which have never before been seen in public.

This month’s auction will be held at the Radisson Martinique in New York City on 49 West 32nd Street.

For additonal information on the upcoming auction, please visit: www.jgreenstein.com