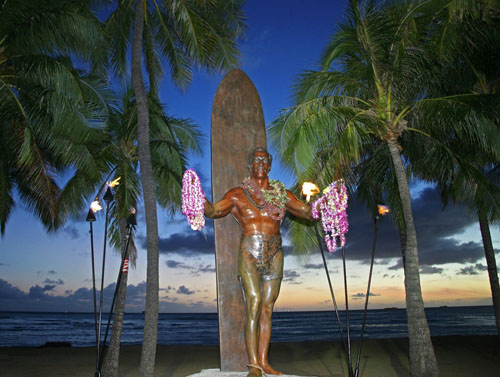 On Oahu, Kahanamoku Beach is located in front of the Hilton Hawaiian Village Beach Resort and Fort Derussy.

Although everyone has heard of Waikiki Beach, it’s actually a two-mile stretch of white sand on Oahu’s southern coast and is comprised of nine individually named beaches.

Kahanamoku Beach can be found on the north end, adjacent to the Ala Wai Yacht Harbor and the Duke Kahanamoku Lagoon.

Kahanamoku Beach was named after Duke Paoa Kahanamoku. He was a legendary figure in Hawaii, setting numerous world records in swimming and an Olympic swimmer Gold Medal winner.

But for Hawaiians, Kahanamoku’s larger contribution was his role in rejuvenating surfing in Hawaii, plus introducing surfing to the rest of the world. He is often called the “Father of Modern Surfing.”

Kahanamoku Beach offers nearly clear, ocean waters and a soft sandy ocean floor. Due to the beach being protected by an offshore reef, the ocean waves are minimal.

The sidewalk near the beach is wide and often busy with locals and visitors strolling along and taking in the fantastic Hawaiian views. It’s definitely one of the best family beaches in all of Oahu.

It was just announced that Kahanamoku Beach was rated the #3 Best Beach in the United States.

Regarding Kahanamoku Beach, Dr. Beach states, “A shallow offshore reef protects this beach from the big waves, making it a great swimming area for families with children.”