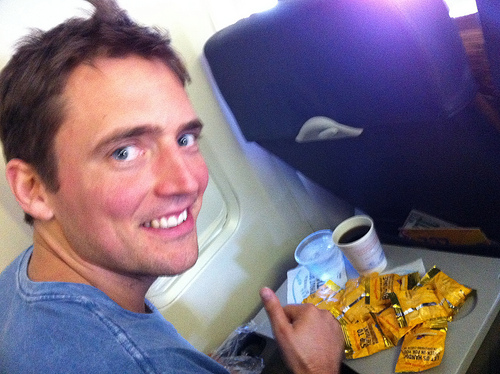 The Life of Luxury was invited to participate in the record-breaking attempt titled ‘Funny on the Fly‘ by popular comedian, Owen Benjamin.

Owen is trying to break the world record for the most visited airports in 30 days. ‘Funny on the Fly’ is co-sponsored by Southwest Airlines and Lenovo.

To make his trip more enjoyable, Owen is equipped with the ideal travel companion. He is using a Lenovo IdeaPad Tablet K1 to help keep in touch with his family, friends and many fans following his quest.

You too can follow his every move along the journey via his Tweets, Facebook posts, or Owen posting humorous pictures and videos. Fans can also track Owen’s adventurous travel route on the following website: www.flyingfunny.com.

As a top comedian, Owen Benjamin has had a very successful career. He’s been a regular on many top TV shows including The Tonight Show with Jay Leno, Late Show with Jimmy Fallon, Chelsea Lately, Comedy Central’s Live At Gotham and MTV’s Punk’d. Owen also co-starred with Christina Ricci in the 2009 Hollywood movie “All’s Faire in Love” and had a role this year in “Jack and Jill” with Adam Sandler.

Owen loves doing stand-up comedy and has performed in many top comedy clubs, including an 18 city U.S. tour with Vince Vaughn and Kevin James.

When asked why he decided to do this, Owen stated, “I love to travel and have always wanted to hold a world record, so why not hold one for ‘travel endurance’? With Southwest and Lenovo, I wanted to be part of something special and thought it would be a lot of fun to try this plus use the Lenovo tablet to connect with the world.”

As Owen was describing his journey to date, I asked him if it’s been easier or harder than than what he expected. He replied, “It’s definitely been much harder, especially in the morning. I often get up at 4:00am to catch the first flight and many times don’t finish my day until after dark. It’s weird but I basically don’t see daylight. I sometimes travel to 4 to 6 cities a day so it’s pretty hard. Plus I find most people don’t want to laugh early in the morning. I’m much funnier in the afternoons. But this experience has given me some ‘forced structure’ which has been really good.”

To give you a a taste of his grueling schedule …. the day of our interview his schedule included traveling through L.A., Sacramento, Portland, Phoenix and San Diego!

As part of the world record attempt, Lenovo and Southwest Airlines are giving away daily free prizes. Win a round trip ticket from Southwest Airlines or your very own Lenovo ThinkPad Tablet. Be sure to register to win at http://www.flyingfunny.com/

When questioned about the most memorable event so far, Owen responded, “I’ve met a lot of really nice people but it’s weird because we just meet for a few minutes and then they’re gone. I don’t have direct contact with my family and friends. But I enjoy seeing someone win a free Southwest trip. A school teacher was so happy to be able to see here mother. That was really nice.”

Owen mentioned he likes to inject fun in every situation he’s in, so you never know if he’s going to stand-up in the middle of a flight and do a comedy routine or take over the mic at a Southwest gate terminal and bark out boarding instructions.

The current world record is 30 city airports in 30 days. He’s targeting about 60 cities and 100 flight legs. Owen is well on his way to shattering that record and hopefully making it stand for many years to come.

Owen, I really enjoyed meeting you and wish you the best of luck on the reminder of your amazing journey.  I leave you with a quote from Ralph Waldo Emerson – “Do not follow where the path may lead. Go instead where there is no path and leave a trail.”