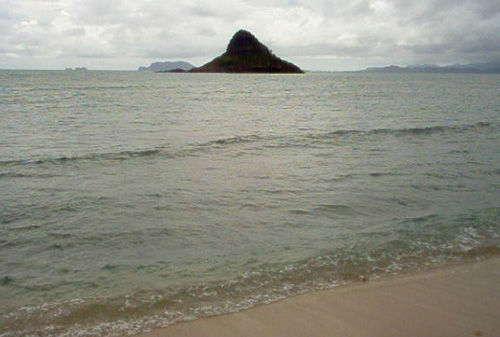 Chinaman’s Hat, also referred to as Mokolii (“little lizard”), is a small island located off Kaneohe Bay in Ohau, Hawaii. It’s a 12.5 acre, 206 foot tall basalt island, about one-third of a mile offshore of Kualoa Point.

Chinaman’s Hat is a cone shaped outcropping of lava off Kualoa Point. Chinaman’s Hat got its name because it resembles the peasant’s chapeau (straw hat) worn by rural Chinese immigrants.

The reef surrounding the island supports an abundance of marine life and is one of the O’ahu’s best offshore islands.

You can see Chinaman’s Hat from numerous vantage points along the coast but the best view is to actually go out to the island. You can walk there during low tide but the best way to get there is via kayak.

On the island is a small beach nestled in a secluded cove. There is also a small cave carved out of lava and a steep volcanic cone perfect for exploring. The view of the Koolau Mountains, Mokapun peninsula, Kahaluu, Kaneohe, and Kailua is unmatched.