Can Lake Tahoe Ever Freeze Over? 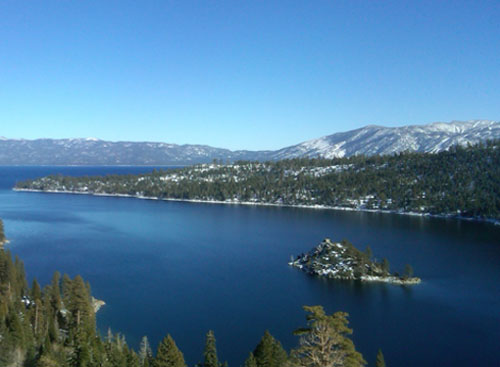 While Lake Tahoe doesn’t get nearly as cold as some parts of the country it does get a wee bit chilly here in the winter.

In fact, on January 20th 1937 the Boca Weather Station observed California’s lowest recorded temperature of 45 degrees below 0 (F). While average temperatures around the lake are generally quite a bit warmer than 45 below we still see roughly 20-30 days a year of below freezing weather.

Combine these temperatures with an average snowfall of just over 200 inches and people are bound to start asking, “Does Lake Tahoe ever freeze over?”

The simple answer to the question is, no. While some ice has been spotted in one or two well protected bays, the entire surface of Lake Tahoe does not freeze over. Why? Great question. There are roughly 3 main factors that prevent Lake Tahoe from freezing over.

1. Lake Tahoe is Too Big to Freeze Over
Lake Tahoe has a surface area of just over 122,000 acres containing an astonishing 39 trillion gallons of water. Considering the average water temperature of the lake is around 68 degrees (F), it would take some substantially cold days for long periods of time before Lake Tahoe began to freeze over. Unfortunately (or fortunately) point 3 below kind of prevents this.

2.Lake Tahoe’s Water is Always Moving.
For water to freeze there must first be a site where crystals begin to form. This is difficult in Lake Tahoe because the water in the lake is always moving. Even on the calmest days when there’s not a boat on the lake the water is moving. Water at the top of the lake is cooled by the air temperature and begins to sink. Warmer water that was insulated by the water above begins to rise. The process then starts all over. This sinking and rising water creates a current which prevents the mass of water from ever getting cold enough while at the same time making it difficult for ice crystals to form.

3.Lake Tahoe is Typically Sunny.
Lake Tahoe sees about 275 sunny days a year. While it does get cold here, it never gets cold enough for a long enough period of time to create much ice on the lake. Even if it did get cold enough to make some large sections of ice this only creates other factors that will likely stop or slow the freezing of the entire lake.

Some More Sciency Stuff
As stated in point 3 even if it did get cold enough for some ice to form on Lake Tahoe it would take quite a lot for the whole lake to freeze. Why? There are some interesting things about ice that ironically prevent freezing. First, ice is a great insulator. As ice forms at the surface the water below is insulated and therefore prevented from freezing. Second ice floats. While this may seem trivial, it’s the floating of the ice that allows the water below to stay insulated. Lastly, as the top layer of ice becomes thicker the insulation only gets better. In theory, it becomes proportionally more difficult for water to freeze the more water above it is frozen. Weird, I know.

Apart from some Hollywood special effects we probably wont be seeing Lake Tahoe freeze over anytime soon. The lake is way too big and the sun shines way to often for Lake Tahoe to become the largest skating rink in the country.

While it would be fun to cruise across the lake on a kite powered skates, seeing the contrast of Lake Tahoe’s blue water against the white snow covered mountains is something I never get tired of looking at.  Article by: Aaron Robbins