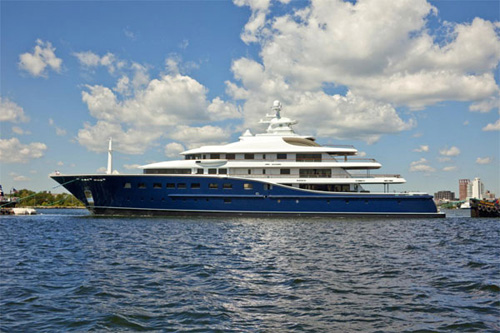 Cakewalk is not just a luxury yacht, but a luxury superyacht. Cakewalk is the largest yacht built in the United States since the 1930′s.

Cakewalk was built by the Derecktor Shipyards in Connecticut, U.S.   Cakewalk is 85.6 meters (280.84 feet) long and weighs 2,950 tons. Cakewalk is now one of the top luxury superyachts in the world.

The  luxurious Cakewalk yacht has four levels of decking, in addition to an incredible central spiral staircase that sweeps the entire height of this amazing ship.

Cakewalk has deservedly so received a fair share of media and industry attention. There is lots of anticipation to discover who the owner is and takes control of the boat with a 24 person crew, two staff members and up to 12 privileged guests.

Cakewalk provides six guest staterooms, which are found on the main deck.  The luxury staterooms include oversized windows that will offer expansive outdoor views.

In addition to the central spiral staircase made with cherry wood panels, all six decks of Cakewalk can be reached by elevator.

It was reported by Yachts International that Cakewalk will be the heaviest superyacht built in the U.S.  It won’t hold the record of the longest, as that feat is held by JP Morgan’s Cosair IV and was built in 1930.

Cakewalk will have a top speed of 17 knots and a range of approximately 9260km at 15 knots.

Although a much deserved superyacht, in comparison, Cakewalk is still only about half the length of the Eclipse, which is reportedly owned by mega Russian billionaire – Roman Abramovich.