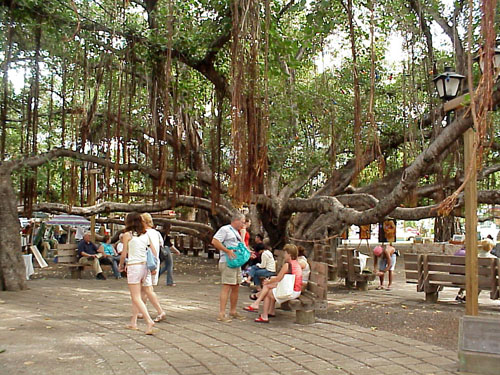 The Banyan Tree in Lahaina on Maui, is an amazing sight. In Maui’s tourist center of Lahaina stands the largest Banyan Tree in the United States.  Although most think it’s a forest of banyon tress, it’s actually a single Banyan Tree.

It fills Banyan Square.  Banyan trees come from Asia, but it would be hard to find anyone who has ever seen anything this size in either India or China, where the Banyans were not allowed such uncontrolled growth.

You’ll think you’ve seen trees until you come across this specimen! Indian in origin, it was originally planted in 1873 to commemorate Christianity’s foothold in town.

More than 125 years later, this mighty banyan rises 50 feet, has added 12 subsidiary trunks to its main support, and encompasses more than 2/3 of an acre.

It’s an ideal place to escape the hot tropical sun. Once you are under it, you’re likely to find craftspeople hawking their wares and artists selling their works.