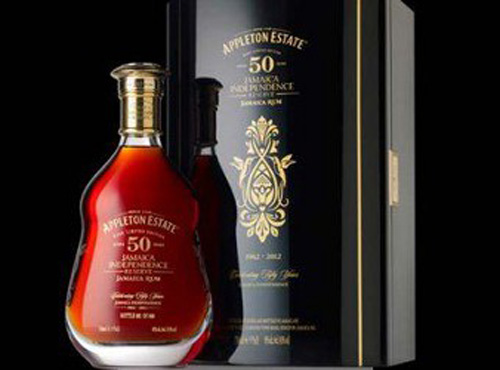 Appleton Estate Rum recently released the oldest rum in the world to honor and celebrate 50th year of Jamaican independence.

Jamaica Independence Reserve comprises rums that have been aged for a minimum of 50 years in hand-selected oak barrels and is believed to be the oldest rum available for sale in the world.

This particular hand-blended rum was put aside back when Jamaican first gained independence. The rum was aged in American oak barrels for half a century, thus making it the world’s oldest rum according to the distillery.

Appleton Estate Jamaica Rums are created at the world-famous Appleton Estate in Jamaica. It’s the oldest sugar factory and distillery and the rums are exclusively distributed in the US by Kobrand Spirits.

These old rums were watched after for over fifty years – initially by Master Blender Owen Tulloch, then by his protege and current Master Blender, Joy Spence.

Master Blender, Joy Spence carefully examined each barrel as the 50th Anniversary of Jamaica’s Independence approached, to make sure the barrels had aged to perfection.

By planning ahead, the rums that make Appleton Estate 50-Year-Old Jamaica Rum were purposely set aside to eventually be used to celebrate the 50th Anniversary of Jamaica’s Independence.

The barrels full of rum were moved from the warehouse to the blending hall and blended together in a special vat and left to “marry,” for several months. The process allowed each rum’s character, flavor and bouquet were allowed to fuse together in harmony.

Each bottle of this rare Appleton Estate rum blend costs £3,500 There are only 800 bottles worldwide available for sale.