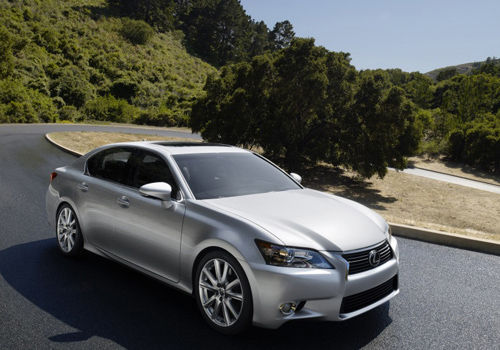 Lexus has long been viewed as a trend setter in the luxury car market and the new 2013 GS isn’t just another sport sedan.

The Lexus 2013 GS was completely redesigned from the road up, the fourth generation GS stretches out with a stance nearly 2 inches wider than previous generations, allowing for a roomier cabin and nearly 25 percent more trunk space. The aerodynamic body is significantly more rigid for a whisper-quiet ride and superior cornering.

Features of the all-new Lexus GS luxury sedan include:

A New Look: From the spindle grille to the two-inch wider stance and industry-first 12.3-inch high-resolution split-screen multimedia display, the GS demands attention.

Power and Agility: The GS was inspired by the Lexus LFA supercar to create a high-performance, driver-focused vehicle with precision and purpose. Key elements include four driving modes—Normal, Eco, Sport S and Sport S-Plus—a more powerful base engine than BMW or Mercedes, six-speed paddle shifters, a redesigned aerodynamic body and a new suspension system for precise cornering.

Seamless Connectivity: The optional navigation system provides the next generation of Lexus Enform®, a safety, navigation, entertainment and communication system that allows you to check-in on Facebook, read reviews on Yelp, buy movie tickets from MovieTickets.com, and make restaurant reservations through OpenTable. Most of these apps can be accessed using a new conversational voice recognition system, so you don’t have to remember a list of commands or take your hands off the steering wheel.

The all-new luxury vehicle from Lexus will be available in three colors that are new to the Lexus color palette: Riviera Red, Meteor Blue Mica and Liquid Platinum.

Innovative, distinctive and paces ahead of the competition, the 2013 GS sets the stage for a fresh generation of Lexus vehicles that includes nine new or upgraded cars launching next year.