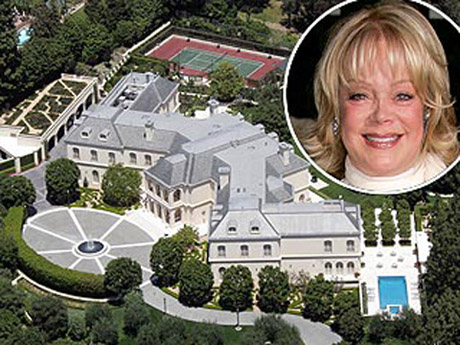 The late Hollywood producer Aaron Spelling, who died in 2006 may be rolling over in his grave. It’s a brutal real estate market out there but now on the market is the most expensive home for sale in the United States.

Aaron Spelling’s widow, Candy, just put the expansive mansion up for sale. The estate is called “The Spelling Manor.” The asking price is an amazing $150 million.

The Spelling mansion is the largest home in Los Angeles County. This iconic French chateau-style property offers about 56,000 square feet of living space and is situated on 4.7 luscious acres of land.

“This house is the equivalent of a mid-sized hotel,” wife Candy Spelling tells PEOPLE. “It’s a lot of work.

“I have wonderful memories here,” Spelling sighs. “But I feel like it’s a new chapter in my life – and it’s just me in this big house!”