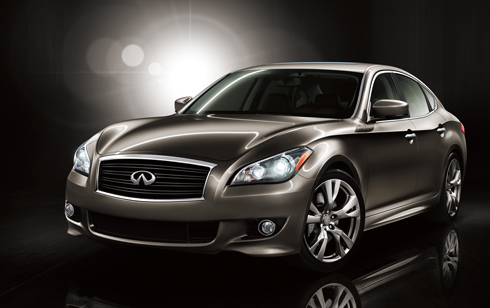 When the current generation of the Infinity M line came to the marketplace in 2006, auto industry experts including Consumer Reports and Car and Driver magazines gave the luxury car much praise.

Infinity,which is part of the Nissan luxury division, announced that they will launch a redesigned version next Spring as one of their 2011 models.

The Infinity M37 and M56 is also expected to offer a spacious interior along with a smooth ride and handling capability that won the current M models such critical acclaim.

The current Infinity M class includes the M35 and M45. But based on the larger engines planned for 2011, Infinity has changed the models to the M37 and M56.

The plan is for the Infinity M’s engine size will increase from the current 3.5-liter, 303-horsepower V6 to a bigger 3.7-liter.

The larger V8 power version, with the 4.5-liter 325-horsepower engine will see an upgrade to 5.6-liter engine that could top 400 horsepower.

The Infinity M line should compete against other luxury cars including the Mercedes-Benz E-Class, Lexus GS and BMW 5-Series.

For more info, go to Infinity