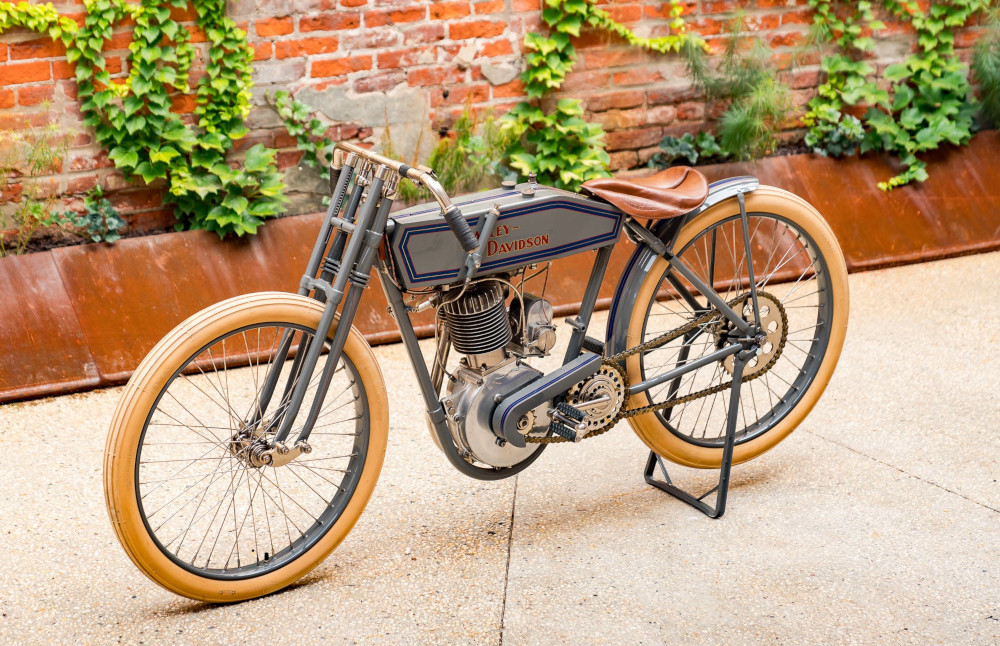 After almost 12 decades in business, the Harley-Davidson name has a lot of history behind it. Completing their first prototype in 1903, the Harley-Davidson company grew fast in a world new to and starved for cheap mechanized transport. The motorcycle brand completed the construction of their first factory in 1906, rolling off about 50 machines of their assembly lines. Early versions came with small single-cylinder engines producing somewhere between 3 and 7 horsepower.

In 1913, Harley-Davidson offered 2 versions of their now tried and true single-cylinder machines. The Harley Model 9A which was belt-driven and the Model 9B which had a chain drive. In addition, both versions feature a single-cylinder 35 cubic inch F-head (or pocket valve) engine, producing around 4.34 horsepower. Plus it features magneto ignition. Additionally for 1913, in a huge leap forward, mechanically operated intake valves of the pushrod and rocker arm type, were now included on the single-cylinder models. inclusion of this system also meant that an additional cam would need to be included.

With the addition of these mechanically operated valves, they paved the way forward for not only Harley-Davidson but all motorcycle manufacturers. Thus, they began pushing their engines to higher horsepower in the never-ending quest for more speed. Production numbers for both models rounded out to be approximately 1510 9A examples produced and 4601 examples of the Model 9B.

The outstanding success of these early machines played a large role in Harley-Davidson becoming the household name that they are today. Today, Board Track Racing machines stand as a testament to a different era. As an example, with far less safety and regard for human life, meant a necessary developmental stage. For example, the quest for speed and bringing solid and reliable two-wheeled transportation into the 20th century.

The 1913 Harley-Davidson 9B Single Cylinder Board Track Racer, engine number 934D is for sale. The asking price is $50,000. This amazing and rare early Harley-Davidson has been built in the style of a board track racer. It is complete with a direct chain-drive mechanism and iconic downward sweeping board track style handlebars. Plus it features locked out pedals and lacking brakes.

The Harley-Davidson 9B has not been run in a long time. It has been stored properly and always very well cared for. The restoration still presents very nicely. Notice the correct colored grey paint laid down smooth and seamless over the tank, frame, and fenders. In addition, there is some scattered spotting in the paint on the tank. Thus, it appears almost as imperfections in the clear coat. Smooth to the touch, but apparent nonetheless.

The pinstriping was applied appropriately and remains striking and clean, minus where the previously mentioned spotting has affected it on the tank. Cosmetically the engine and mechanical pieces show in nice order. The metal is bright with no signs of any major issues. Lastly, the finned cylinder head shows no signs of issues and all fins appear to be solid.

This stunning Harley-Davidson 9B motorcycle sits on white reproduction Firestone tires. They are size 28 x 2 1/4. The tires show some minor cracking in the sidewalls. In addition, there is some discoloration and dirtiness. But they are perfectly suited to static display. The iconic and sweeping drop handlebars present quite nicely. Hence, they are finished with the appropriate style wrapped grips. Also, they feature leather control cable wraps, a nice finishing touch.

Overall this motorcycle represents an amazing look into the early days of motorcycling. The Harley-Davidson 9B represents the thrill and the death-defying sport of Board Track Racing that grew up alongside these amazing machines.

The Life of Luxury has personal connections all around the world for new, classic and vintage cars and motorcycles.

We hope you enjoy reading about this amazing 1913 Harley-Davidson 9B Single Cylinder Board Track Racer. Return soon to follow the latest news in the car and motorcycle industries.