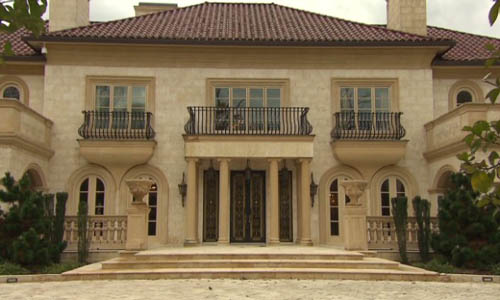 In Buckhead, which is a wealthy neighborhood in the suburbs of Atlanta, Georgia, you can now own a luxury home that has the unique distinction of being featured in several Hollywood movies and TV shows.

This incredible, Mediterranean-style mansion for sale boasts 40,000 square-feet of living space and is situated right across the street from the Governor’s Mansion. It comes with 9 bedrooms, 7 kitchens and 15 bathrooms!

The nine-bedroom, Buckhead home has been featured in “Zombieland” as the home of comedic actor Bill Murray and the recent “The Three Stooges” movie. The mansion was also seen in the MTV reality series “Teen Cribs”, and “Million Dollar Rooms” on HGTV. It will be featured in the upcoming TV show “Devious Maids.”

Buckhead is a distinguished community that consists of a wide variety of beautiful luxury homes, distinctive estates and executive homes, in addition to many historic Atlanta Mansions.

As most expensive home for sale in Atlanta, it boasts everything from hand laid mosaics and 24-karat gilded ceilings throughout, a stunning home theater with seating for 16, a cigar bar, plus its own nail and hair salons.