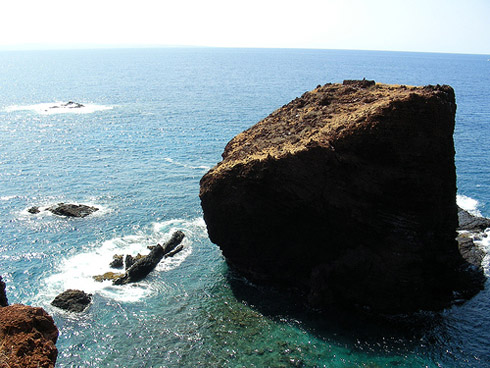 The rock can be reached by following the shoreline from the left side of Hulopoe Beach. There you will find a large cove lined with a white sand beach.

Sweetheart Rock is about 80 feet high with a summit that measures approximately 70 feet in diameter. The “tomb” area at the top of the rock can be seen easily from an overlook on beach shore.

According to Hawaiian legend, Pu’u Pehe, who was a young girl, drowned in a sea cave. Her lover, with help from the Gods, carried her body to the summit and buried her beneath the ruins of what is believed to be an ancient bird shrine.

Archeologists who have studied the sea stack, report that there are no human remains in the “tomb” at the top of the rock. Many archeologists believe the “tomb” may really be a bird heiau built by ancient Hawaiians. Numerous bones from sea birds have been discovered near the heaiu.

A trail from Hulopue Beach leads to a wonderful overlook of Puu Pehe Rock.