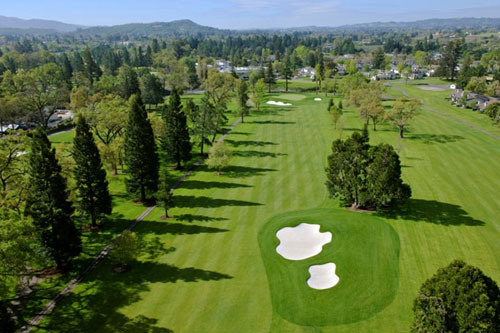 The championship North Course at Silverado Resort and Spa was voted one of Golf Week’s “Top 100 Resort Courses” and will now host the 2014 Frys.com Open.

Located in beautiful Napa California, the luxury resort is owned by golf legend Johnny Miller who was quoted, “We are thrilled to host the season opening PGA TOUR tournament on our iconic property.”

The four-day golf tournament is the opening event of the PGA TOUR season and will feature a full-field of 132 players, who will all be vying for a $5 million purse and $900,000 payout to the winner.

The luxurious Silverado Resort and Spa in Napa promises a grand lineup of exceptional golf on their 18-hole par-72 Robert Trent-Jones designed North Course, which was renovated in 2011 by Johnny Miller. For many years, golf pros and amateurs have enjoyed this gorgeous golf course that sprawl across 360 acres and features dozens of water crossings, elevation changes, and routing through oak, pine, and redwood trees.

Silverado Resort and Spa started as a private estate and was converted into a contemporary resort featuring 390 guest rooms, a 15,000-square foot conference space, two PGA championship golf courses and two signature restaurants. Now this luxury resort has been a California landmark for more than 140 years.

The PGA TOUR and Champions Tour are no strangers to Silverado. The resort’s two golf courses have combined to host 28 Professional Tournaments, that includes: the 1968-1976 Kaiser International Open Invitational; the 1977-1980 Anheuser-Busch Golf Classic; and the 1989-2002 Senior PGA “The Transamerica” event, featuring such legends as Jack Nicklaus, Arnold Palmer, Tom Watson, Lee Trevino, and Silverado’s own Johnny Miller.

Johnny Miller also stated, “Our North Course is amongst the most challenging and beautiful courses in the state, and over the last two years the Troon team and I have ensured the playing experience is superior in every way.”

The Frys.com Open will be televised worldwide on the Golf Channel during all four days of the prestigious pro golf tournament.

To learn more about the Silverado Resort and Spa or the upcoming 2014 Frys.com Open golf tournament, please contact The Life of Luxury.