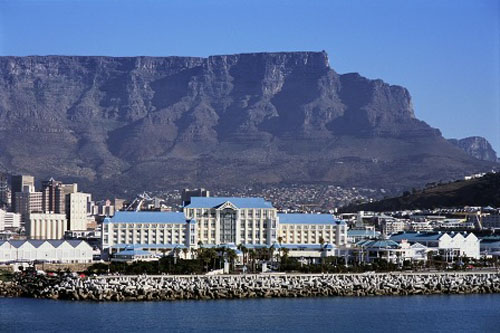 In Cape Town, South Africa – The Table Bay Hotel celebrates its 15 year anniversary this month. The luxury hotel opened back in 1997 and has been an icon for travelers ever since.

You can find The Table Bay hotel in the shadows of majestic Table Mountain. The Table Bay is a Sun International property in Cape Town and is truly an architectural masterpiece that combines Victorian style with maritime design elements.

As it turns out, Mr. Mandela was rather prophetic as within 18 shorts months after opening, The Table Bay hotel achieved membership into the prestigious Leading Hotels of the World, perfectly positioning it as a luxurious port-of-call for modern travelers.

The luxurious Cape Town has also received numerous accolades for its quality service, luxury accommodations, and fine cuisine. The Table Bay Hotel is annually featured in the Conde Nast Traveler “Readers Choice Awards” as well as other prestigious national and international publications.

Located on the Victoria & Alfred Waterfront, The Table Bay hotel embodies all the tradition, grace and elegance befitting a five-star property while still maintaining its own unique nautical character.